First there was the GPD Pocket. Then came the One Mix Yoga. And then the floodgates seemed to open, with companies including Topjoy and Chuwi entering the emerging mini laptop space.

Now a new model called the Peakago promises to be one of the most affordable models to date.

It’s said to be a tiny laptop with a 7 inch, 1920 x 1200 pixel touchscreen display, a 360-degree hinge, Windows 10 S software, 8GB of RAM, and 128GB of storage. And it’s expected to sell for around $300… although it’s unclear if that’s the retail price of a promotional price — the Peakago isn’t available for purchase yet, but the company’s website promises a 40-percent discount for folks who sign up for notifications.

The next step will be an Indiegogo crowdfunding campaign sometime in the not-too-distant future.

Update 10/8/2019: I’m told that the team behind the Peakago is updating the specs, so the original description is no longer accurate. Stay tuned for more details as they become available.

Update 11/15/2019: The Peakago crowdfunding campaign is now live and after an update, it turns out there will be three prices/configurations (see below). 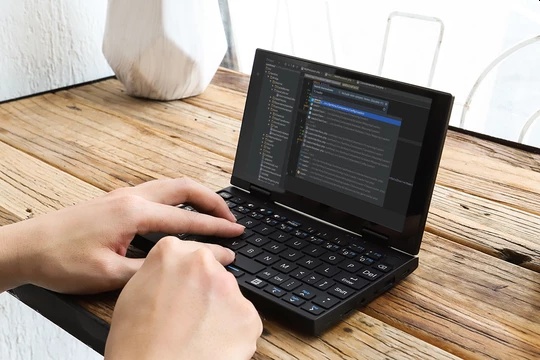 On paper, the Peakago looks like an interesting addition to the mini-laptop space for folks who want a small screen and a relatively low price tag.

Update: Here are the crowdfunding prices/configurations:

According to the Peakago website, the company behind this little computer is an OEM/ODM factory that’s already produced an initial batch, but which will be turning to crowdfunding after a collaboration with a contract manufacturer was cancelled.

As with any crowdfunded project, it’s probably best to approach the upcoming Peakago campaign with a grain of salt. We’ve seen some scammy-looking mini-laptop campaigns in the past. But there’s nothing in the description of the Peakago that looks implausible to me… even if the device looks like a pretty blatant knockoff of existing devices like the GPD Pocket and One Mix Yoga.