The latest iPad is expected to go on sale in stores on March 16th, but it looks like some folks in Vietnam have gotten an early look. Tinhte.vn forum member Sonlazio posted an unboxing video and some early benchmarks. 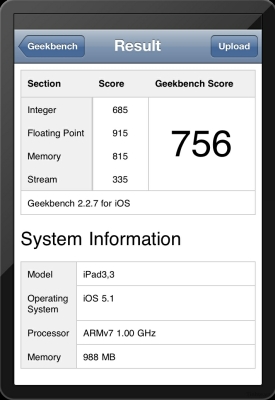 While there aren’t a lot of surprises, the benchmarks do show that Apple has doubled the amount of RAM used in the new iPad.

The new iPad also features a shiny new Apple A5x processor with quad-core graphics, but the benchmarks confirm that the CPU is still a dual-core processor running at 1 GHz.

Meanwhile, the Geekbench benchmark scores for the new iPad are nearly indistinguishable from those for the iPad 2. That suggests that either the test isn’t optimized to detect the differences, or that the biggest performance gains will be in the new graphics processor which is designed to crank out imagery to the new iPad’s high resolution 2048 x 1536 pixel display.