Motorola’s Webtop platform lets you connect supported smartphones into a docking station that looks like a laptop. This lets you use your phone with a keyboard and a large display.

But since Motorola introduce the platform in 2011, the Webtop software has had a split personality. When holding the phone in your hands, it runs Google Android. But when you connect it to a laptop dock a custom version of Linux fires up with access to the Firefox web browser and your address book and phone dialer… and not much else. 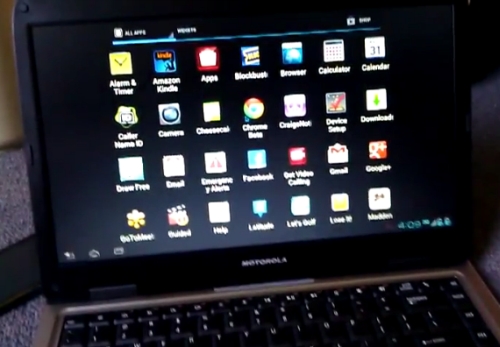 Now it looks like Motorola may be scrapping the idea of installing two separate operating systems on its phones. Instead, the next version of the Webtop software may just look like Android 4.0, allowing you to run the Android web browser and other Android apps on a laptop-sized screen.

YouTube user revowii has posted a video showing a leaked beta of Motorola Webtop 3.0. When he connects the phone to the laptop dock an Android 4.0 desktop appears. You can see the Android home screen, settings menu, and web browser as well as a list of all the apps installed on the phone including Kindle, Google+, and the Google Chrome beta web browser.

Not all of these apps play well with the Webtop 3.0 user interface, since they may not be designed for the larger screen. But at least it looks like you don’t have to flip between different user experiences.

A year ago it probably made sense to use different software in laptop and phone modes, since Google offered separate versions of Android for phones and for devices with larger screens such as tablets. But now that Android 4.0 supports all sorts of shapes and sizes, there’s no need for Motorola’s custom solution.

There’s no word on when Motorola will officially release the new software.