Whether you prefer Google’s version of Android or HTC’s, there are a few features in HTC’s software that aren’t available with the Google Play edition, such was the Sense camera with support for HTC Zoe, ad support for the phone’s infrared port, which lets you use your phone as a TV remote.

But what if there was a way you could run both versions of Android on the same device, and switch between them with a tap of a button? Developer Paul O’Brien is working on a tool called MoDaCo.SWITCH which’ll let you do just that. 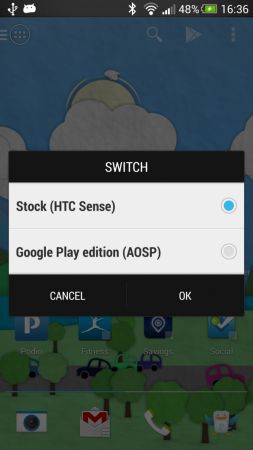 The software will give users the best of both worlds, although it’ll eat up more storage space than running a single ROM and it will probably require rebooting (O’Brien hasn’t actually said much about how his software will work yet.

He has said that he’s also working on a custom ROM that will really offer the best of both worlds though — which lets users choose which parts of the HTC Sense and Google Play Edition ROMs they want to use.

O’Brien says there’s also been enough demand for a SWITCH app for the Samsung Galaxy S4 for him to consider working on that after the HTC One version is complete. That’s another phone that’s available with two different user interfaces. The Google Play Store offers a version with stock Android, while most Galaxy S4 phones are sold with Samsung TouchWiz software.

4 replies on “MoDaCo.SWITCH for HTC One will let you flip between Sense, Google Experience”