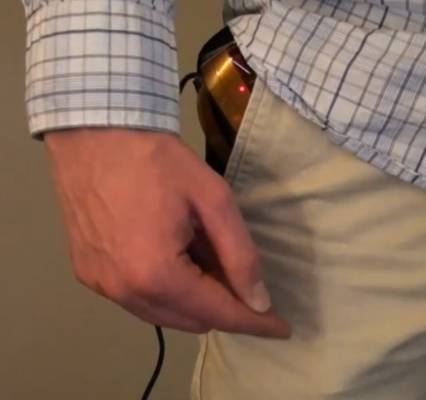 Microsoft Research has developed a new capacitive touch technology called PocketTouch that works even when you place a piece of fabric between your finger and the touchscreen. This could let you control music playback or even send text messages on a phone without removing it from your pocket — or even sticking your hand in your pocket.

Since you can’t actually see your screen you won’t be able to interact with icons — but Microsoft developed a gesture-based input system. This lets you unlock the device by performing a gesture, and that lets your phone or tablet know which way is “up” thanks to some gesture-based orientation defining technology.

Microsoft has tested the system with heavy fabric including jacket pockets, and it turns out the PocketTouch system works.

At first blush, PocketTouch seems rather odd: Why would you want to use a mobile, touchscreen device without removing it from your pocket. But I can imagine a few situations where this would be useful:

Right now PocketTouch is just a research project in the prototype stages. Maybe one day we’ll see the technology in real products. There’s no word on when Microsoft will develop technology that lets you stroke your pocket without looking ridiculous.