But maybe that will change now that LG has introduced a new 13.3 inch foldable OLED display that’s suitable for laptops and tablets.

It’s one of several new flexible displays that the company is showcasing during this week’s SID Display Week virtual conference. 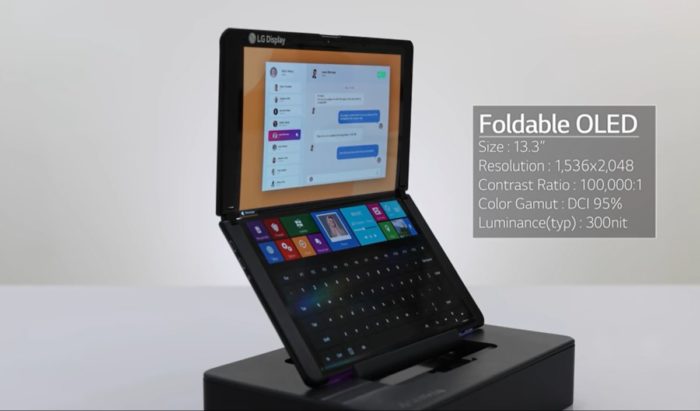 LG says its laptop-sized foldable screen is a 13.3 inch, 2048 x 1536 pixel display with 95-percent color gamut and support for up to 300-nits of brightness. When fully unfolded, that gives you a large tablet. When bent at the center, a virtual keyboard or pen input field can be displayed on the bottom portion of the screen, allowing you to use a computer in laptop mode.

The LG prototype used to show off this display also includes a notification area at front of the device, where the screen wraps around the bottom edge in a way that allows you to see time, battery and wireless status, and other information as well as incoming messages.

According to LG, the foldable LED is also “the first of its kind” to support active pen touch input.

5 replies on “LG shows off a 13.3 inch flexible displays for laptops (and other new screen tech)”