LG’s next big thing is literally big. It’s a smartphone with a 5.5 inch, 1920 x 1080 pixel display. In other words, it’s about the size of a Samsung Galaxy Note phone, but it has a higher resolution screen.

The LG Optimus G Pro also features a shiny new 1.7 GHz Qualcomm Snapdragon 600 processor. The Verge reports the phone is expected to ship in North America during the second quarter of 2013. 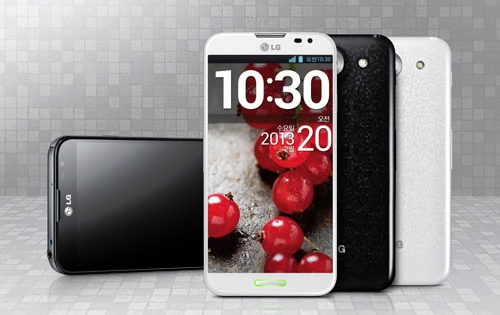 LG’s previous phone, the Optimus G features a Snapdragon S4 processor and a 4.7 inch, 720p display. Google partnered with LG to build the Nexus 4 smartphone, which is basically an Optimus G with rounded edges and no official support for 4G LTE networks.

That doesn’t mean we should expect a Nexus 5 phone with a bigger screen anytime soon — Google has previously partnered with HTC and Samsung on Nexus phones. There’s no guarantee the next model will be based on an LG design.

But if you’re looking for a phone with an enormous display and an awful lot of pixels, it looks like LG may have you covered in a few months.

The phone is also expected to feature a 3140mAh battery, 2GB of RAM, 32GB of storage, and Android 4.1.2 software. There’s a 13MP camera on the back and a 2.1MP front-facing camera, and the phone features WiFi, Bluetooth, NFC, and video output with a SlimPort HDMI adapter.

LG offers a smaller version of the Optimus G Pro in Japan, featuring a 4 inch screen.