Lenovo appears to be preparing to launch a new 10 inch Windows tablet with an Intel Atom Bay Trail processor and specs that you don’t often find on small Windows tablets, including a full HD display, up to 4GB of RAM, and up to 128GB of storage.

Details for the upcoming Lenovo ThinkPad 10 have popped up at a number of retail websites, although Lenovo has yet to actually announce the tablet.

Update: It looks like the tablet is official. It popped up recently at the Lenovo Australia website. 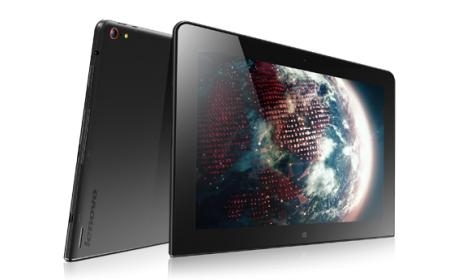 The tablet appears to feature an 8MP rear camera, 2MP front-facing camera, a multitouch display, support for a pressure-sensitive digital pen, and a microSD card slot.

The ThinkPad 10 is also reported to have business-friendly features including a FingerPrint Scanner, Smart Card Reader, and Windows 8.1 Pro software.

Lenovo’s tablet is powered by an Intel Atom Z3795 processor, one of the most powerful of the new Atom Bay Trail chips Intel is launching in the coming months. It’s a 1.6 GHz quad-core chip with burst speeds up to 2.39 GHz.

Unfortunately premium features come at premium prices — and if the retail listings in Europe are to be believed, it looks like a fully decked-out version the tablet could sell for close to 976 €, or more than $1300 US. I’ll take that price with a grain of salt until we see an official announcement from Lenovo.

via TabTec and Tablet PC Review