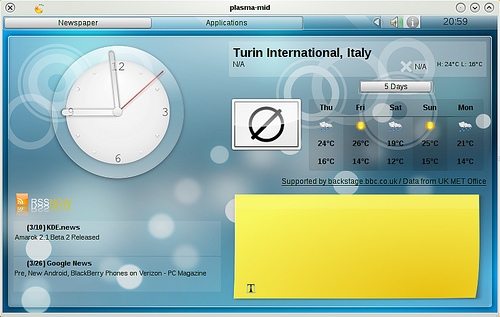 The folks behind the KDE desktop environment for Linux are working on optimizing KDE 4’s Plasma user interface to play well with netbooks. That means applications and widgets have to look good on low resolution displays, and graphical effects can’t be too resource intensive.

So far, it looks like things are off to a good start. According to a recently released photo and video, it looks like the netbook version of KDE 4 will take a cue from the Ubuntu Netbook Remix user interface, which basically shows a single window at a time on the display. But the Plasma interface is much prettier to look at than the mostly utilitarian Ubuntu Netbook Remix interface which is based on the GNOME desktop environment.

KDE 4 lets you switch between open programs using an Apple Exposé-like view that shows thumbnail versions of running applications. Individual programs open in full screen mode by default, and there’s a single taskbar at the top of the screen to provide system information, a program menu, and a list of running apps.

You can check out a video demo of KDE Plasma for netbooks after the break.