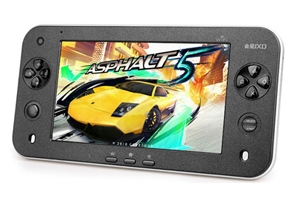 The JXD S7100 is a portable Android device that looks like a cross between and Android phone and a handheld gaming console. It can run classic Gameboy, Nintendo, or other console games using emulators and the game buttons built into the sides of the device. But it’s also a full-fledged Android device with a touchscreen display and support for Angry Birds and other modern classics.

We first spotted the JXD S7100 last month. But it turns out there are at least two different versions of the gaming handheld — and it’s probably worth spending the extra money on the more expensive model.

Capacitive touch displays interact with the electrical impulses in your fingertips. Since most Android games are designed for finger input rather than the fingernail or stylus you’d need to use with a resistive touch panel, the capacitive version is probably the way to go if you want to play touch-based games.