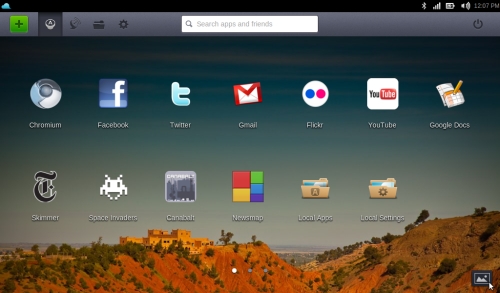 The folks behind the Jolicloud operating system are pushing out version 1.1 later today. The OS started off as a “netbook” OS, but with this release, Jolicloud has been optimized for desktops and other computers as well — although there’s still code designed to make the operating system pretty zippy on an Intel Atom-based netbook.

The mote noticeable change in the new version is an updated HTML5-based user interface, but there are also optimizations that should lead to improved battery life and performance, including support for 720p HD video playback on devices with supported hardware (such as an Intel Atom N550 dual core processor).

While Jolicloud is based on Ubuntu Linux, the operating system sets itself apart by relying heavily on web apps. You can install native Linux apps such as OpenOffice.org, but you can just as easily “install” web apps like Google Docs from the Jolicloud app store. In both cases a shortcut is added to your program launcher, and a single window opens when you launch the app. It’s just that one app is stored on your hard drive while the other is stored in the cloud.

Jolicloud also stores your settings online, so you can get online from any computer with a web browse to manage your account and install or rearrange apps.

There’s also a social element, allowing you to add friends and see what apps they’ve been installing.

Jolicloud 1.0 users will be prompted to install the Jolicloud 1.1 update in the next few days, .