The Windows Subsystem for Linux allows you to download and install Linux and run command-line tools (and soon full-fledged desktop apps) on a Windows 10 computer. But installing a Linux distro using WSL has been a kind of tricky, multi-step process… until now.

Earlier this year Microsoft announced it was working on an update that would let you install the Windows Subsystem for Linux simply by typing wsl --install into a command prompt. Now that feature is here… sort of. 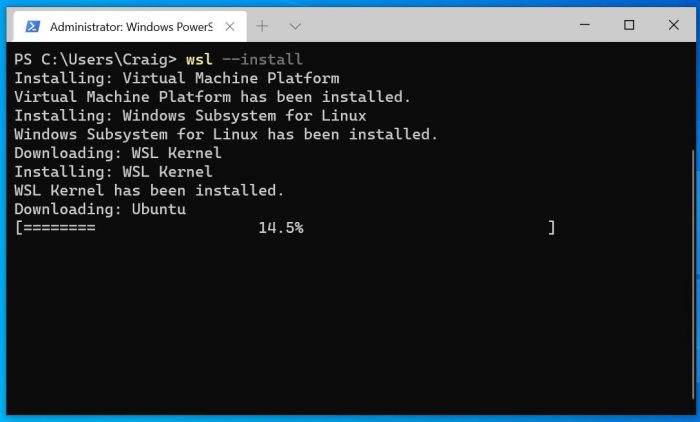 Microsoft released Windows 10 Insider Preview Build 20246 today, and along with a bunch of bug fixes, it brings support for the new  wsl --install command.

In a nutshell, all you have to do to install the Windows Subsystem for Linux is open a command prompt, PowerShell, or Windows Terminal window, type wsl --install and hit enter. It’ll install all the necessary components and then download and install Ubuntu by default.

If you’d rather install a different Linux distribution, you have other choices. Just add a little extra info to the command before you hit enter so that it reads wsl --install -d <DistroName> where <DistroName> is the name of the OS you want to install. Here’s the list of options available so far:

If you don’t feel like downloading a pre-release version of Windows 10, you can always wait for the feature to make its way to a stable release in the coming months. But you can still install Windows Subsystem for Linux the old-fashioned way:

Optionally you can also upgrade from Windows Subsystem for Linux version 1 to WSL 2 for improved performance, but that involves taking several additional steps.