A few years ago Motorola introduced a smartphone that shook up the idea of what we should expect from a low-cost smartphone. The 2013 Moto G sported a 720p display, a quad-core processor, and decent build quality for under $200, at a time when most phones in that price range cut quite a few more corners.

A year later Motorola launched an updated model with a bigger screen, a better camera, and improved speaker placement.

Now it looks like a 3rd-gen model is on the way. 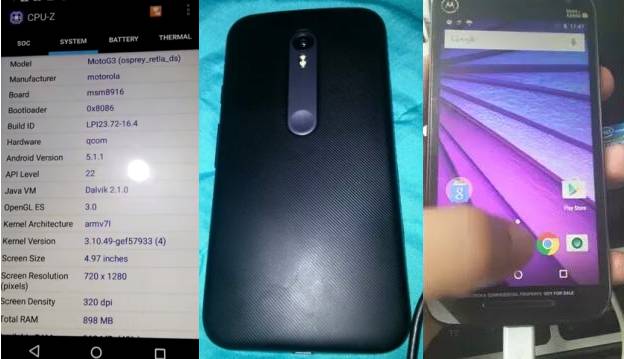 This weekend HelloMotoHK posted a few pictures of phone that’s said to be the 2015 Moto G. A video is also making the rounds.

Both reportedly show a prototype of the 3rd-gen Moto G, and if the details are accurate, here’s what we can expect from Motorola’s next version of the phone:

That would mean the new phone has a higher-resolution rear camera and a newer (but not entirely new) processor than last year’s model. The 2nd-gen Moto G has a Snapdragon 400 chip, while the 3rd-gen model would have Qualcomm’s newer, 64-bit Snapdragon 410 chip based on ARMv8 architecture.

For the most part, it looks like the new model still has the specs of a budget phone though… and I kind of wonder if Motorola will continue to charge $180 for a device with specs that would have looked great a few years ago, but which are less impressive today.

There are a growing number of affordable Android smartphones with decent specs, including the $199 Asus Zenfone 2 with 2GB of RAM, 16GB of storage, and an Intel Atom Z3560 Moorefield processor or the $249 OnePlus One with a Snapdragon 801 processor, 3GB of RAM, and 16GB of storage. It’s harder for a budget smartphone to stand out in 2015 than it was in 2013.

That said, we don’t know yet whether the specs for the 3rd-gen Moto G have been finalized or even if the photos and videos really show a new Moto G device. We might not know for a few more months… Motorola unveiled the first two members of the Moto G family in an October and a September, respectively. It seems likely that the next model won’t be officially introduced until closer to the fall.