Intel is showing off a smartphone prototype that can also power a desktop PC experience. No, it’s not running Windows 10 Mobile and using Continuum for phone software. Instead, this is a low-power phone with an Intel Atom x3 processor and two operating systems: Android and a custom version of Debian Linux. 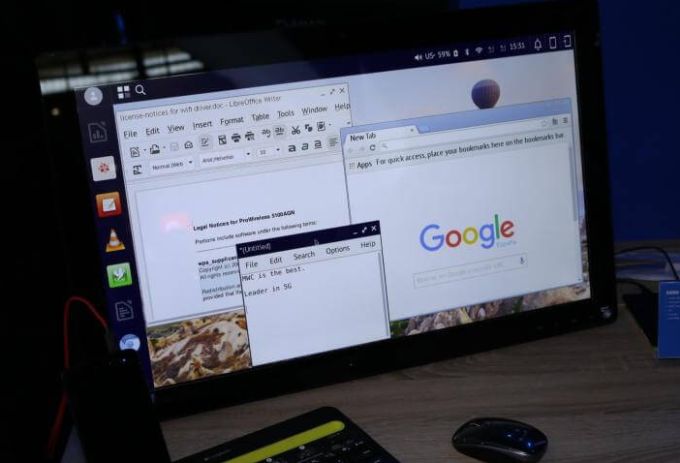 German site WinFuture got a chance to check out the prototype at Mobile World Congress, and it looks like the phone’s low-power processor does a decent job of powering a pretty basic desktop experience.

In the demo, you can see VLC playing a video while LibreOffice Calc and Writer (spreadsheet and word processing apps) run in other windows, and the Google Chrome and Firefox web browsers are also running at the same time.

Unlike Continuum for phone though, which lets you continue to use your phone while running full-screen apps on an external display, it looks like you can only interact with one operating system at a time on Intel’s smartphone prototype. When using the device in desktop mode, the smartphone screen turns off. Android does continue to run in the background though, and you’ll see notifications on the Linux desktop if calls or text messages come in while the screen is off.

Also unlike Continuum for phone though, you can run apps in resizable windows that can be positioned anywhere on the screen. The only real problem is that screen resolutions are limited to 720p because the hardware isn’t really powerful enough for higher-resolution displays.

But WinFuture reports phones with this technology could sell for as little as $100, which would make them far cheaper than any smartphones that support Windows 10’s Continuum for phone feature.

Update: Charbax from ARMDevices notes that a company called KEP was showing a similar demo developed with Foxconn and Intel a few months ago, but he’s just now uploaded a video demonstrating the Android/Debian Linux software: