Intel’s upcoming Atom Z3770 processor is a low power, quad-core chip that will be part of the Bay Trail family. It uses the company’s new Silvermont technology, which is expected to power upcoming Atom, Celeron, and Pentium chips, although the Z3770 is a lower-power chip that’s likely aimed at Windows or Android tablets.

Benchmark results for the new chip showed up recently at the Geekbench website, which provides us with an idea of what kind of performance to expect — and gives us a way to see how the new Atom Z3770 chip compares with other processors. 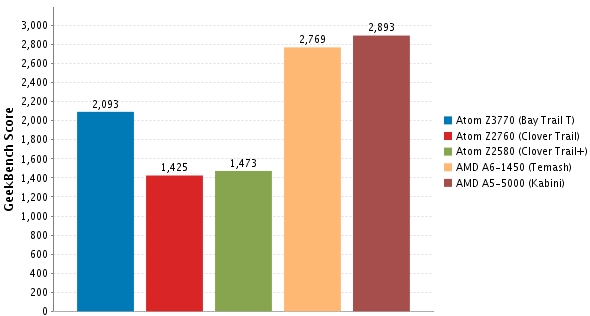 While the Intel Atom Z3770 chip is expected to run at speeds up to 2.4 GHz, the benchmark results are for a quad-core chip with a clock speed of 1.46 GHz. It was tested on a device running Windows 8.1 Pro Preview 32-bit.

Geekbench gives the chip a score of 2093.

In other words, the new processor is faster than any Intel Atom chip released to date, at least according to Geekbench. If faster versions of the chip really do run at higher speeds, the gap could be even wider.

But while Bay Trail chips are faster than any Atom processors that came before (and more energy efficient, for that matter), these are still low-power chips that won’t offer the same kind of performance you’d get from an Intel Core processor — or even a mid-range AMD processor, if Geekbench’s comparisons are to be believed.

Both of those chips are expected to use more power than the Intel Z3770 processor. AMD’s quad-core Temash chip has a TDP of 8W, and the quad-core Kabini is a 15W processor.

Intel hasn’t provided a TDP figure for the Z3770 chip yet, but it’s expected to have an SDP of 2W. That’s Intel’s figure for average power use under typical conditions, and it tends to be a bit lower than the Thermal Design Power or TDP which chip makers have historically used to measure a processor’s power consumption.

But I’d be surprised of the Z3770 uses as much power as the AMD A6-1450, which means that you’ll likely find this Intel processor in tablets or notebooks which provide long battery life and moderate performance.

Bear in mind, the Z3770 is one of the least powerful processors in the upcoming Bay Trail family. Other chips based on Intel’s Silvermont architecture are expected to consume more power, but offer the kind of performance you’d expect from a laptop or desktop chip, and some will be sold under the Celeron or Pentium names to help differentiate them from the Atom processors, which have earned a reputation as relatively slow chips.

Also keep in mind — these Geekbench results appear to be for an unannounced, pre-release chip. While it’s likely that someone at Intel or one of the company’s partners is running some tests on a prototype, there’s no guarantee that the processors which hit the streets later this year will score the same on benchmarks as the pre-release models.

via @luka, @DresdenBoy, and Investors Hub