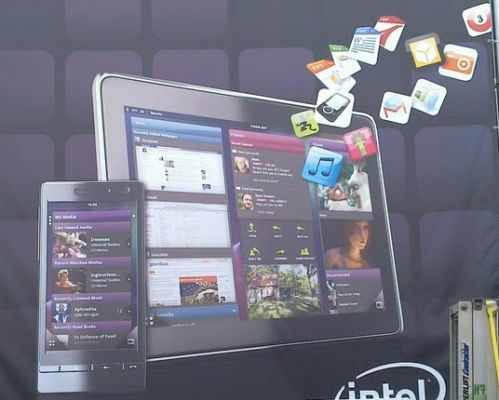 There’s been a lot of talk this weekend suggesting the folks at Nokia didn’t bother letting Intel know that the phone maker was practically pulling the plug on development of products that would run the MeeGo Linux operating system before making the announcement on Friday. And it looks like that means Fujitsu isn’t the only company ready to introduce products running MeeGo — an operating system that just lost one of its biggest backers.

Engadget spotted a photo that looks like it’s going up at Intel’s Mobile World Congress booth this week, showing what appear to be a smartphone and a tablet running MeeGo.

The mobile operating system is optimized to run on Intel’s Atom processors, including new low power chips that Intel is hoping will power next-generation smartphones and tablets. While Nokia was one of Intel’s largest partners, MeeGo continues to be managed by The Linux Foundation, and it’s possible that Intel could use its clout to convince other device makers to bring products powered by MeeGo to market… but it looks like the netbook version of the operating system is pretty much a lost cause at this point. It’s also possible that the poster at Intel’s booth is just a remnant of the company’s optimistic thinking from before Nokia’s recent announcement.

17 replies on “If MeeGo is dead, someone forgot to tell Intel”