Huawei’s latest Android tablets are now available in the US from retailers including Amazon and Newegg.

I’ve been testing a 10.8 inch model Huawei loaned me for a few days, and it’s a pretty nice device… if you can justify spending $360 on an Android tablet in 2018. 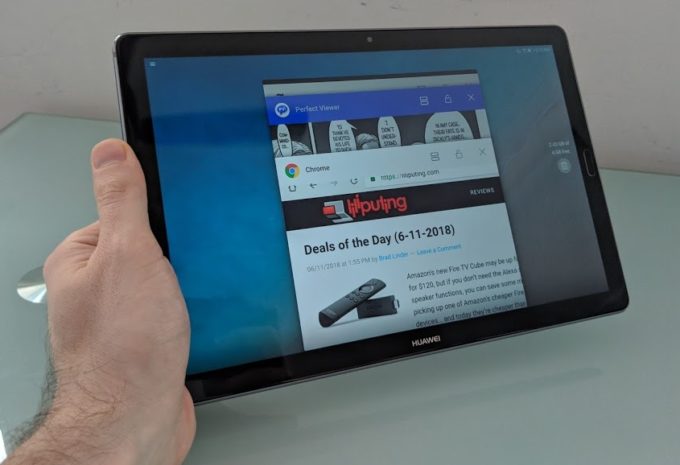 So let’s take a look at the differences:

Like the entry-level 8.4 inch tablet, this version, this model comes in a “space gray” color and has a Kirin 960 processor. But it features quad speakers and a larger 7,500 mAh battery, so the larger size isn’t the only thing that justifies a price bump.

The MediaPad M5 10.8″ measures about 10.2 x 6.8″ x 0.3″ and weighs 1.1 pounds. It has a gray back with antenna lines along the top edge (in landscape orientation, and Pogo pins pins on the bottom for an optional keyboard cover, which is sold separately.

All told, it’s a nice looking tablet that’s also comfortable to hold in one hand or two. The display is large enough for comfortably reading eBooks, digital magazines, or other content and videos look great. You can even kind of type with 10 fingers using the on-screen keyboard if you can get used to the fact that you don’t get the same type of tactile feedback you’d get from a physical keyboard.

Everything seems pretty snappy and I had no problems streaming videos from Netflix or YouTube, reading eBooks in the Kindle app, comics in Perfect Viewer, or playing games. The Kirin 960 may not be Huawei’s fastest processor, but it was zippy enough to handle the apps I threw at it, and the tablet’s 4GB of RAM was able to help with multitasking. With 64GB of storage, you could also download a bunch of movies, load up a bunch of songs, and still have room for some big games.

The tablet’s cameras are nothing to write home about, but the camera app does offer manual controls if you want to try your hand at improving on the default/auto settings.

Huawei also includes some interesting software features in its EMUI user interface, including support for App Twin, which lets you log into the same app using multiple accounts by running multiple instances side-by-side… although it officially only supports Facebook and Messenger. Unofficially, on the other hand…

There’s also a desktop mode that makes Android look like Windows XP, complete with a desktop, taskbar, and start menu.

The tablet also lets you choose between a few different navigation modes. You can use the standard Android navigation with on-screen back, home, and recents buttons. But you can also hide the navbar and instead use the fingerprint sensor for gesture-based navigation:

Using gesture-based navigation does give you a little more screen real estate, but it also takes a split second longer to go to the home screen than it would with an on-screen button. I also occasionally forget which gesture to use and end up going back when I meant to go home, but the more you use the tablet, the more likely you are to avoid making that mistake.

Overall it only took me a few minutes to get used to the differences between EMUI and stock Android. For the most part the experience is similar enough that I had no problem adjusting. Most importantly, the tablet ships with Android 8, so pretty much any app that runs on my Pixel 2 smartphone can also run on the MediaPad M5 10.8.

One thing I do find odd is the decision to place the fingerprint sensor on the same side of the tablet as the volume and power buttons. This means that if you’re holding the tablet in portrait orientation, there’s a good chance the power and volume buttons are on the bottom, which feels a little awkward.

The tablet also lacks a dedicated headphone jack, but Huawei includes a USB Type-C to 3.5mm audio adapter in the box.

The top-of-the-line model shares most of its features with its more affordable sibling. But this $450 model supports pen input thanks to the included Huawei M-Pen. 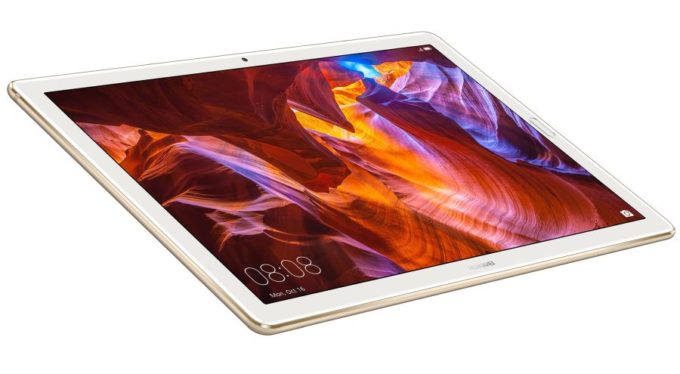 Huawei says the digital pen supports 4096 levels of pressure sensitivity and it has a battery that runs for up to 50 days on a charge. When the battery runs low, you can charge it using the MediaPad M5’s USB Type-C charger to top off the battery in less than 2 hours.

The Pro model also comes in a “champagne gold” color and features a Kirin 960s processor (with Huawei’s NPU for hardware-accelerated AI features).

The larger models also have a Pogo-pin connector for attaching to an optional keyboard cover (sold separately).