AT&T has announced it will be the exclusive US launch partner for the new HTC Jetstream tablet. The Jetstream, formerly known by its code-name “Puccini” is the HTC Flyer’s big brother. While the Flyer has a 7 inch display and runs Google Android 2.3 Gingerbread, the Jetstream has a 10.1 inch screen and will ship with Android 3.1 Honeycomb. 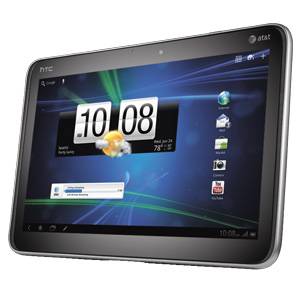 The HTC Jetstream tablet features a 1.5 GHz Qualcomm Snapdragon dual core processor, HTC Sense software with custom home screen widgets and applications, and the HTC Scribe software which will allow you to use a digital pen to write or draw on the tablet. For a limited time AT&T will throw in the pen for free when you buy the tablet.

Now for the bad news. AT&T will charge a whopping $699.99 for the tablet — and that’s the price when you sign up for a 2 year service contract. The HTC Jetstream will run $849 if you try to buy it contract-free.

That’s not necessarily a ridiculous price for a device with the Jetstream’s specs… but with Apple iPads starting at $499, many Android tablets selling for even less, and a new batch of $99 HP TouchPad tablets due out in a few weeks, $700 seems like a lot of money to spend on a tablet. Hopefully HTC will have a cheaper, WiFi-only model soon as well.