The GPD Win is a tiny computer that looks like a laptop, but which features a 5.5 inch touchscreen display, a thumb-sized QWERTY keyboard, and dedicated gaming buttons above the alpha-numeric keys.

GPD ran a series of crowdfunding campaigns for the project earlier this year, started taking pre-orders in June, and plans to begin shipping GPD Win handheld gaming computers to customers in October.

But it turns out those computers will be a little more powerful than expected. 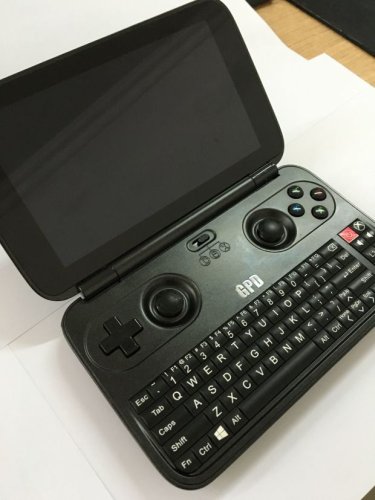 The company had originally planned to use an Intel Atom x5 Cherry Trail processor, but now GPD says the GPD Win will ship with an Atom x7-Z8750 processor, or an x7-Z8700 chip if the newer Z8750 variant isn’t available.

Clearly it’s not designed for playing bleeding edge video games, but it should be able to handle many casual games available from the Windows Store as well as older PC games and some classic console titles (when used in an emulator).

While the company has been offering Android-based devices for a few years, the GPD Win is the first model to to run Microsoft’s desktop operating system. And it might be the last.

In the same announcement where GPD announced plans to upgrade the processor for the GPD Win, the company suggested that plans for a next-gen, GPD Win 2 may be canceled.

Since Intel recently announced plans to discontinue its Atom processor family, GPD isn’t sure it’ll be able to find low-power, Windows-compatible chips for future models. Intel does plan to offer higher-performance “Apollo Lake” chips for notebooks and tablets, but those chips are expected to consume more power and generate more heat than Atom processors, which means they might not be appropriate for a handheld device with a 5.5 inch display like the GPD Win.