Apparently not content to simply clone high profile smartphones before they go on sale, the folks at Chinese device maker Goophone are going one step further.

They’ve unveiled the Goophone M8, a smartphone that borrows heavily from the design of the not-yet-announced all new HTC One, also known as the HTC M8. 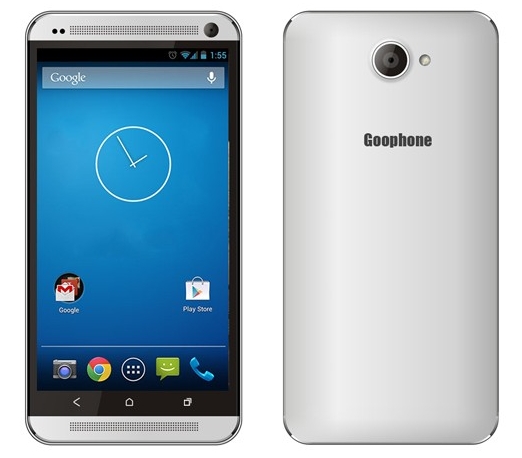 HTC’s expected to introduce its next-gen HTC One at an event on March 25th. But there have been numerous leaks leading up to launch day, so we already have a pretty good idea of what the phone will look like — and that makes it pretty easy for companies like Goophone to copy.

The Goophone M8 is missing one of the things that makes HTC’s upcoming phone special: The HTC M8 has two camera lenses on the back of the phone, while the Goophonoe M8 appears to have just one.

That said, the Goophone model is about the same size and shape as HTC’s phone and has pretty decent specs, including a 5 inch, 1920 x 1080 pixel display, and a 1.7 GHz MediaTek MT6592 octa-core CPU. It has a 12.6MP rear camera and 5MP front-facing camera and features a microSD card slot.

Without the dual camera lenses (and with on-screen buttons below the display), the HTC M8 looks almost as much like an original HTC One as it does a second-generation model. But that’s not necessarily a bad thing. They’re all pretty decent looking phones.

Goophone’s M8 has just 1GB of RAM and 16GB of storage, and it’s expected to ship with Android 4.2 Jelly Bean software. But with a starting price of $230, those features don’t seem all that bad. It’s likely that the new HTC One will sell for at least twice as much.

5 replies on “Goophone clones the (unannounced) all new HTC One”