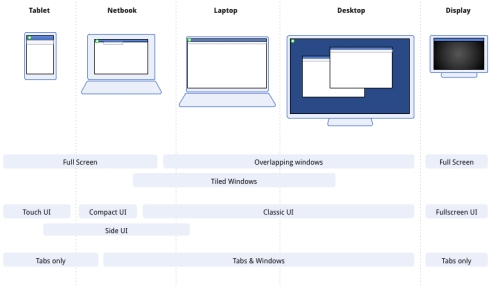 Google has said that its upcoming Chrome operating system is designed primarily for netbooks at launch. And that makes sense, since it’s basically an OS built around a web browser. Sure, you can play music, movies, and store some files. But ultimately, the goal is to provide you with the tools to quickly and easily access millions of web sites and web apps. In other words, Google doesn’t really expect you to use Chrome OS as a your primary operating system if you need to run resource-intensive desktop apps. But it’s a light weight operating system that’s ideal for low power computers that you use on the go.

But that doesn’t mean Chrome OS is only for netbooks. Yesterday we spotted evidence that Google was at least considering porting the OS to work with tablet-style computers. Now it looks like there’s evidence that Google is thinking about other platforms, including full size laptops, desktops, and even large screen displays or projectors.

The key differences seem to be that some devices will have a full screen user interface while others will have tiled or overlapping windows, allowing you to see more elements at once. For the most part, devices with smaller screens, such as tablets and netbooks get the full screen UI, while larger notebooks and desktops get tiled windows. Large screen devices like commercial displays get a full screen UI.

As far as I can tell, these are only concepts for now. When Google officially launches Chrome OS later this year, it’s expected to be targeted squarely at netbooks. But who knows what could be in the plans for next year? I also wouldn’t be surprised to see Google expand into the tablet space if the iPad and other tablets take off over the next few months.