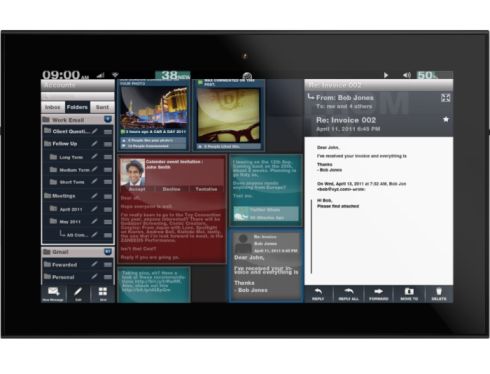 The Grid 10 is the second tablet from Fusion Garage… the company behind the ill-fated JooJoo. But while the JooJoo had a unique browser-based operating system and no support for third party apps, the Grid 10 is a 10 inch tablet with an NVIDIA Tegra 2 dual core processor and an operating system based on Android. While it doesn’t look like Android, the tablet can run thousands of Android apps, which makes it a lot more useful than the JooJoo.

Unfortunately there may be other reasons to avoid the tablet. The folks at Engadget have posted a detailed review, and while they enjoyed using the Grid 10’s home screen which allows you to layout your application icons on… a grid, they were less impressed with the screen, battery life, and overall performance.

Engadget’s Tim Stevens reports that the $299 tablet ran for just 4 hours, 24 minutes on a charge while watching videos, which is well short of the 7 or more hours you can get from similar tablets. He says the Grid 10 also suffered from poor viewing angles, and that the touchscreen wasn’t very responsive — so it sometimes wasn’t clear whether the device had registered a gesture or other action.

The tablet also performed miserably on the SunSpider JavaScript benchmark. Android tablets with similar hardware completed the same test in nearly half the time.

Overall the Grid 10 has some decent hardware including a 1366 x 768 pixel display and the same processor found in most Android tablets released during the first half of 2011. But the one thing Fusion Garage says really sets this tablet apart is the software. Unfortunately it looks like it might not distinguish the Grid 10 in a good way.