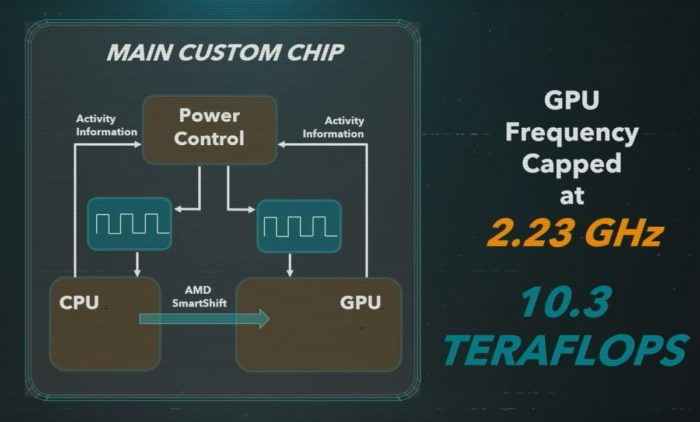 The game console will be powered by an 8-core AMD Zen 2 processor with custom RDNA 2 graphics offering 10.28 TFLOPs of performance, 16GB of GDDR6 memory, and an 825GB SSD — which should bring a big boost to game loading times, since the PS4 had a hard drive.

But the PS5 isn’t the only new game console coming this year. It will compete with Microsoft’s upcoming Xbox Series X, and Sony’s spec reveal comes just two days after Microsoft told us what to expect from its next-gen console. On paper it looks like the Xbox might have a bit of an edge… although it’s probably a bit too early to say whether the specs-on-paper will translate into real-world performance differences.

That said, the hardware is similar enough that it’s actually pretty easy to do a spec comparison for the current and next-gen game consoles for the two companies, thanks to information compiled by Eurogamer:

While the Xbox Series X seems to hit some higher numbers on the spec sheet, Eurogmer notes that there are some key differences in the way the CPUs of the two new game consoles will handle power consumption and clock speeds, which could help make up for those differences.

For example, the PS5 processor supports variable speeds — but unlike most PCs, phones, tablets, and other devices that doesn’t mean they run slower when hot. Games should always run the same way on every PS5, no matter the environmental conditions — and that means that the PS5 should be able to hit the clock speeds necessary to deliver the game play you expect at all times.

Game developers targeting the Xbox Series X will theoretically have access to a CPU with a higher top frequency and a GPU with more compute units. But they’ll need to be more conservative with power consumption in order to guarantee reliable performance.

And as Gizmodo explains, the Xbox Series X may have more GPU Compute Unites, but the PS5 GPU runs at higher frequencies — which could result in stronger performance in some circumstances.

Other features Sony is promising include support for ray-tracing, backward-compatibility with PS4 titles, and support for USB hard drives.

You can read more about the new features and expected performance for the upcoming PS5 in Eurogamer’s extensive article, or check out Sony’s “The Road to PS5” video below: