FreeNAS is a free and open source operating system designed for network-attached storage (NAS) devices. For much of the past decade, the project has been led by the folks at iXsystems, which has also produced an enterprise version of the software called TrueNAS.

Now iXsystems has announced that FreeNAS and TrueNAS are merging. Moving forward there will be a single operating system called TrueNAS rather than two different, but closely related operating systems. 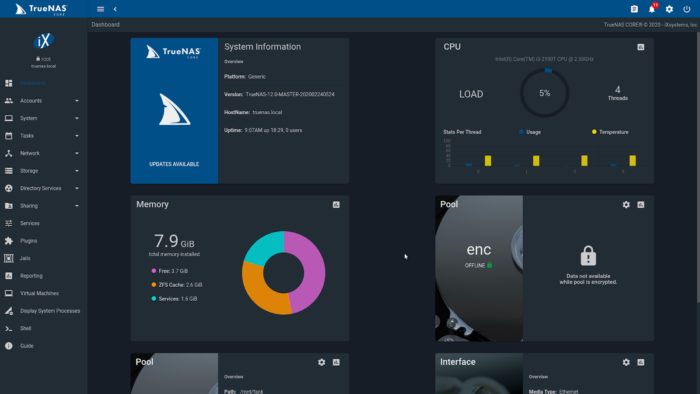 According to the company, the latest versions of the operating systems (FreeNAS 11.3 and TrueNAS 11.3) already share about 95-percent of the same source code. Starting with TrueNAS 12, there will only be a single OS image. But the company will offer two editions:

CORE stands for Community Supported, Open Source, Rapid Development, and Early availability, which should give you an idea of what to expect from the open source edition, which is based on the free and open source FreeBSD operating system.

But iXsystems says offering an OS with “free” in the name wouldn’t go over well with corporate customers, which is why the company decided to keep the TrueNAS name while dropping the older (and possibly more descriptive) FreeNAS.

Nightly preview builds of TrueNAS 12.0 are scheduled to drop starting March 11th and will include new features including support for “Fusion Pools” that let you mix SSD and HDD vdevs or disk pools, and support for encrypted datasets.

In addition to no longer needing to maintain two separate code bases, the folks at iXsystems say that merging the two operating systems will also allow for a quicker development and release schedule, quicker support for new hardware, simplified documentation, and other advantages that come from freeing up developers from the need to work on two different projects instead of one.

You can find more details in the iXsystems blog post about unification, or check out the new TrueNAS Core 12.0 forum for community discussions.