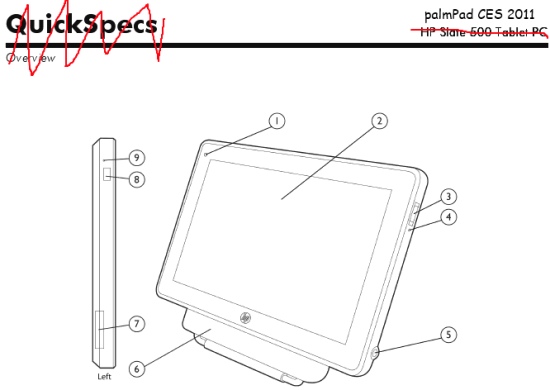 According to Fox News, HP/Palm will be showing off three new tablet devices at CES in January. Fox states that the PalmPads will run webOS 2.5.1, and sport similar hardware to the iPad. The device will feature USB 3.0, possible multi-format card reader and a mini-HDMI port, as well front and rear-facing cameras (at 1.3 and 3 megapixels) — and interestingly enough, Fox believes both cameras will have an LED flash. In addition to the three models shown there, Palm will also reportedly offer a fourth version designed for student use — which HP hopes will be on campus for the Fall 2011 semester.

I’m taking this “exclusive” with a grain of salt. After all, the post even refers to HP’s “never-released Slate” — which was actually released a couple of months ago. Both Engadget and Precentral seem leery of this one as well, feeling instead that it’s more likely that HP may have simply re-used an existing diagram. It’s also possible that Fox News was stuck for an image and grabbed something from and existing HP doc that looked like a tablet.

For the diagram to be accurate — and the PalmPad to truly be a re-purposed Slate — the x86 internals would have to be gutted and replace with something more like what’s found in the Pre 2. It would also mean that HP/Palm decided not to re-jig the device’s exterior at all, which would again be a very odd decision.

It also seems a bit odd that they’re planning to unveil the devices at CES 2011. Both HP and Palm have stated that their presence at the event will be diminished this year, and that’s not really what you’d expect if they really intended to launch something as highly-anticipated as a series of webOS tablets.