There are a few things that can make a computer noisy. The fans that keep the CPU and other components cool can generate some noise. A hard drive has moving parts which can click and whir. And optical disc drives make noise as the spin discs.

So if you want to build a silent PC you need to deal with those things — and redditor DeFex has done so rather beautifully with his DIY silent computer project. 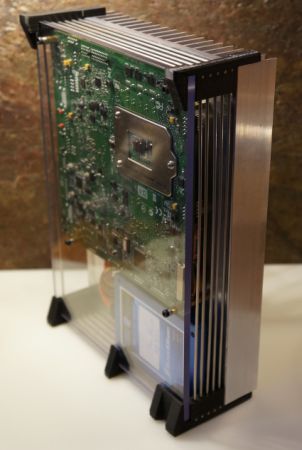 The computer features a 65W Intel Core i5 Ivy Bridge processor, so it’s a fairly powerful system for handling media playback, gaming, or whatever else you might want to do with a home theater PC.

It also features a solid state disk instead of a traditional hard drive. This should speed things up a bit, since SSDs offer faster read/write speeds. But they also generate less heat and have no moving parts… which means no noise and no need for fans.

There’s no disc drive in this system, so that problem is dealt with. But what about keeping the CPU cool?

For that, DeFex picked up a  10″ x 7″ heatsink from HeatSinkUSA. It’s not a bad looking piece of metal, which is important, since it takes up one entire side of the homemade PC case. But more importantly, it provides a passive cooling solution by drawing heat away from the motherboard.

This kind of DIY project isn’t for everybody. It involves some precision work, and some parts were manufactured using a MakerBot 3D printer. But it’s pretty nice to see a silent PC case that’s as attractive as it is functional… or at least theoretically functional. The system is still a work in progress and hasn’t been thoroughly tested yet.