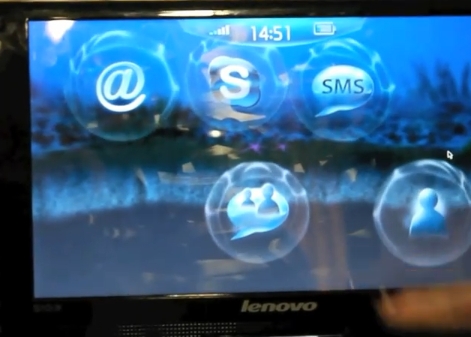 MeeGo is a light weight Linux distribution that’s been optimized to run on smartphones, tablets, netbooks, and other devices with low power ARM, Intel, or AMD chips. The OS is tweaked to run on low resolution displays and to handle low power processors. But while you can certainly run a vanilla MeeGo installation on your mobile device, MeeGo technology is also available for use in other Linux-based operating systems. Linpus, Fedora, and others have already added MeeGo code to their software.

But while some folks are busy taking the MeeGo user interface and adding it to other operating systems, a company called Digia is showing off a custom user interface that runs on top of MeeGo Linux.

MeeGo Experts caught the Digia UI on video, and it sure looks very zippy and oh-so-pretty. Honestly, it doesn’t look all that useful though. The company showed a Lenovo IdeaPad S10-3t convertible tablet with the Digia UI, which simulates an underwater scene with your program icons floating in bubbles. You can drag them around, watch air bubbles reach the surface, and scroll left and right.

The UI also runs on the Nokia N900 smartphone, but the animated effects look much better on the Atom-based S10-3t. Overall, I think you’re better off sticking with the stock MeeGo user interface — but it’s interesting to see what kind of tools third party developers are putting together for the platform.