CPU-Z is a popular tool that lets Windows users identify information about their computer’s CPU, memory, motherboard, and more. Now CPU-Z is also available for Android, making it easy to find out everything you ever wanted to know about your device’s hardware, but didn’t know who to ask. 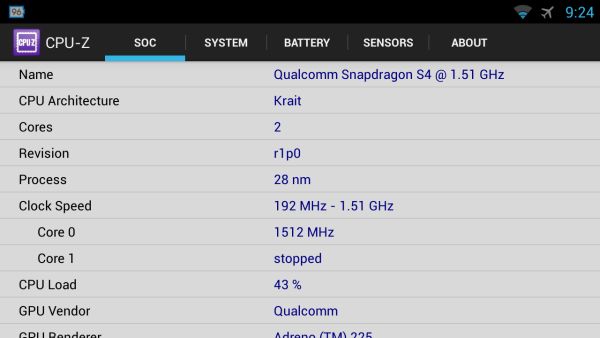 The free tool can tell you the type of processor your phone or tablet has, report the current speed of each CPU core, provide information about the CPU load, and tell you what kind of graphics core your chiphas.

There’s also a System tab that shows your device model name, manufacturer, Android version, kernel version, and more, as well as storage and memory stats and your screen resolution.

Battery information including the amount of juice you have left, and the temperature is also available. And if you scroll over to the Sensors tab, you can even see live information about magnetic fields, orientation, and more.

If you just picked up a new Android device and need to know more about what’s under the hood, CPU-Z might be the sort of app you download and use once or twice. But it can also come in handy if you’re trying to monitor the health of your system over time, so it might be worth keeping installed.

Either way, the app is currently in beta, so there may still be some bugs. But it’ll likely remain free even after the beta period ends, just like the desktop version.