The Lenovo Legion Cube C730 is a gaming PC with an unusual design: instead of a large tower, it comes in a relatively compact 13″ x 9″ x 9.5″ chassis with a motherboard that runs down the middle and fans that blow air pass the top and bottom of the board to help keep the system cool during gaming sessions.

While the system has a handle on top to make carrying the PC with you, I wouldn’t exactly call the Cube C730 “portable.” It weighs nearly 20 pounds and it doesn’t have a battery. The handle just makes it a little easier to move the computer from room to room in your house, or to pack it up and take it to a LAN party if that’s still a thing gamers do in this era of online multiplayer games.

Lenovo unveiled its latest Legion Cube gaming PCs earlier this month, and I got a few minutes of hands-on time with it at an event in New York City last night. The Lenovo Legion Cube C730 should be available in August for $930 and up. 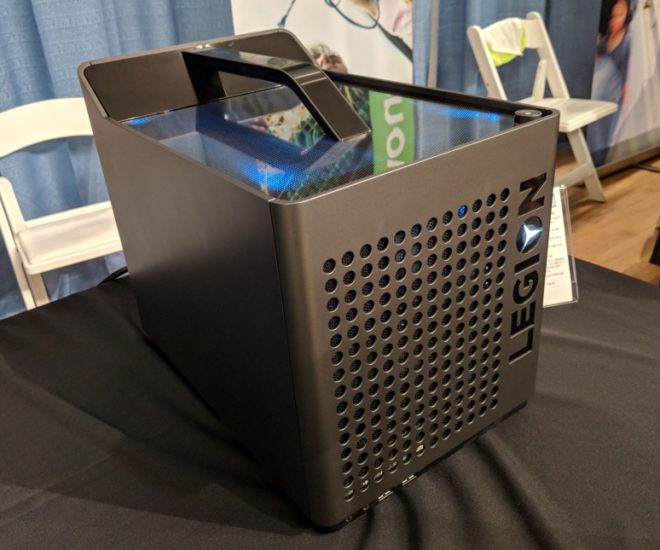 The first thing that strikes you about this computer is that it does look small by desktop tower standards… but it’s still pretty big compared to the 15.6 inch gaming laptop that was sitting next to it.

It’s also a lot more powerful, with support for up ton an Intel Core i7-8700K processor, up to 32GB of DDR4 memory, up to 512GB of M.2 PCIe solid state storage, and up to 4TB of hard drive storage (thanks to dual drive bays).

It also supports NVIDIA GeForce GTX 1060 or AMD Radeon RX 570 graphics and has a transparent panel in the top of the chassis so you can peek inside and get a good look at the graphics card and some other components. There are also RGB lighting effects, making that view a little more colorful.

There are two USB 3.0 ports and mic and headphone jacks on the bottom front of the case, and on the back you’ll find four more USB 3.0 ports, two USB 2.0 ports, three DisplayPort, one HDMI, and one DVI port, an Ethernet jack, and another audio out jack.

Lenovo will also offer a slightly less powerful Legion Cube C530 Cube that tops out at a Core i7-8700 processor and which lacks the RGB lighting. That model is also coming in August, but it has a starting price of $830, making it about $100 less than the Cube C730.

I feel like I should also point out that “Cube” is a bit of a misnomer. While these computers come closer to the platonic ideal of a Cube than a traditional tower PC, I’m pretty sure the definition of a cube is a 6-sided shape where all sides are of equal size. That’s not quite the case with these gaming PCs.