Ever find yourself staring at your computer screen and wishing you were looking at a game rather than a spreadsheet? Now there’s a way to turn pretty much anything on your screen into a game… if you’re using a Mac.

Software developer Aaron Randall recently created an OS X application that can transform a portion of your screen into a playable level of Super Mario Bros.

In an attempt to practice building a Cocoa app using the Sprite Kit, Randall created a semi-transparent window that users can hover over a portion of their computer screen.

After clicking inside the window, the app will repopulate the content on the screen into bricks. For example, the Google logo gets a brick overlay. The background turns blue and clouds populate the sky. Then, a certain brick-breaking man in red overalls drops down from the sky that you control.

You can then jump from a lower platform to smash out as many bricks as you can reach. When creating a Mario level, be sure to find a visual that includes multiple platforms for extra fun. 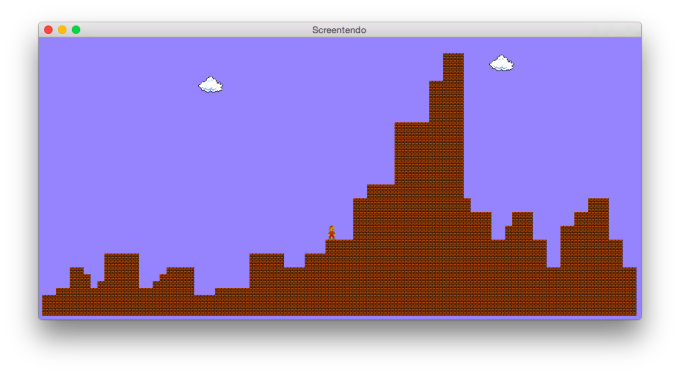 Randall has made the source code for Screentendo available via GitHub. Users can then compile the code with CocoaPods in XCode right on their own Mac computer.

The developer also notes that Screentendo is a proof-of-concept hack. “I didn’t set out to write a Super Mario Bros emulator, just something that would work ‘well enough.’” Don’t expect it to work perfectly.

The best way to populate a good-looking level is to use an image with distinct contrast in the underlying image, something with solid shapes and a blank background (like the Google logo).

If you are a Mac user, download the code and have fun turning your morning blog reading into Super Mario Bros.