After months of previews, sneak peaks, glimpses, and beta updates, RIM has finally released BlackBerry PlayBook OS 2. While it’s not going to turn the original PlayBook into an iPad killer, the update has brought tons of new functionality to RIM’s tablet. And that’s terrific news for everyone who’s recently picked up a heavily-discounted PlayBook — and for folks who paid full price and wondered when they’d finally get a really functional tablet.

From day one, the lack of these apps has been underscored as one of RIM’s biggest mistakes. Previously, these apps could only be used when you paired a PlayBook with a BlackBerry smartphone and used the BlackBerry Bridge software — and the PlayBook was limited to pulling information from the phone.

With native apps now available on the PlayBook, it’s a much more attractive option for folks who wanted a tablet but didn’t own a BlackBerry phone — or have any plans to buy one.

The email client bears some similarities to Google’s tablet-friendly version of Gmail. RIM’s slick calendar app helps you quickly identify busy days on your schedule by making the numbers increase in size as tasks pile up. Tapping a particular day brings up an Outlook-style timeline view in a narrow column on the right-hand side of the screen.

The contacts app features social networking integration, allowing you to view information from LinkedIn and Twitter profiles. You’re also able to view shared events from your calendar as you browse contacts. Change a detail, and anyone involved will be notified of the update.

With the PlayBook OS 2 update and a fresh release of the BlackBerry Bridge app, you can now use your phone as a full-featured remote for your PlayBook. Don’t like the onscreen keyboard? Use the QWERTY keypad on your phone instead.

Touchscreen BlackBerry phones can transmit gestures to the PlayBook (including its border swipe gestures), and the optical trackpad can be used to “mouse” around.And just as you can plug in an HDMI cable and view your PlayBook’s video output to a big screen TV, you can transmit your phone’s display to the PlayBook with the new Bridge app (no cable required, of course).

It’s a great way to show off documents, spreadsheets, and slideshows during a private business lunch or meeting 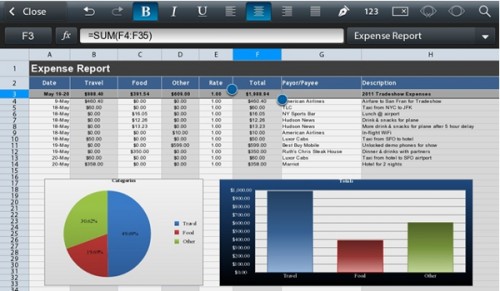 When RIM acquired DataViz, it was a foregone conclusion that they’d be integrating the company’s Docs To Go productivity suite into future OS releases. Docs To Go offers on-the-go editing of Word, Excel, and PowerPoint files. Unfortunately, support for cloud storage services like Dropbox, Box.net, SugarSync, and Google Docs isn’t available for the PlayBook version yet. Perhaps that’s coming in OS 2.1.

The updated version offers a feature called Print To Go which makes it easy to transfer any printable content on your computer to your PlayBook for mobile presentations — rather than printing out a hard copy as you might otherwise have done.

The original PlayBook browser was good, but the updated version is a substantial improvement. It offers more robust support for HTML5, and improved performance. There aren’t any major front-facing changes to see, but who cares — if compatibility and speed are better?

With the possible exception of the missing native apps, the Android App Player may just be the single most anticipated addition to PlayBook OS 2. BlackBerry Appworld doesn’t offer a huge number of awesome apps for the PlayBook, and RIM came up with a clever solution: implement an Android VM that runs on the PlayBook and allows it to utilize Android apps developers have already coded.

It worked quite well even in early beta versions, and developers lined up when RIM started handing out free PlayBooks in exchange for Android app submissions.

There’s a slight downside, of course. RIM doesn’t want you installing just any Android apps. They want you downloading officially vetted apps from App World. However, beta versions of PlayBook OS 2 could be jailbroken using Dingleberry and it was a fairly painless process to get the Android Market app (and the rest of the Google apps) installed.

If the Dingleberry crew can deliver now that OS 2 has been released, you’ll be able to do that again very soon — so don’t give up hope just yet just because RIM appears to have plugged all the holes that would allow jailbreaking.