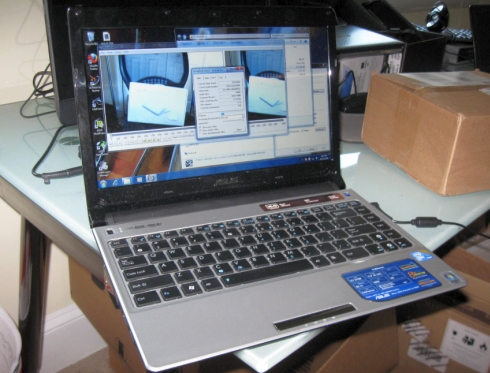 I’m not a big fan of benchmarking tests like PCMark and 3DMark because I don’t feel like they give the average user a good idea of how a PC will perform in real-life scenarios. Over the past two years, this hasn’t been much of an issue because most of the laptops I’ve reviewed have been netbooks with Intel Atom N270, N280, or Z520 processors. In other words, they all performed pretty much the same.

Sure, there was the occasional Intel Celeron or VIA Nano chip thrown in for good measure. But for the most part, if you picked up a laptop with a 12 inch or smaller display for under $500 between 2007 and mid-2008, odds are it had an Intel Atom CPU. So I didn’t have to work that hard on the performance section of my laptop reviews.

Well, the times, they are a-changing. Soon Intel will launch its updated Intel Atom platform and it’s likely that we’ll start to see machines with Intel Atom N450, D510, and other chips hit the market. But more importantly, Intel is promoting its Consumer Ultra Low Voltage (CULV) platform for 11 to 12 inch thin and light laptops. AMD has its NEO line of processors. And we’re well past the days when a processor’s clock speed could tell you all there was to know about its performance.

So in order to help keep track of the new systems with processors like the Intel Core 2 Duo SU7300, Intel Pentium SU4100, Intel Pentium SU2700, Intel Celeron 743, and AMD Neo MV-40, I’ve put together a list of common CPU-intensive tasks that you might expect to do on a portable laptop. This includes transcoding audio and video files, copying a large number of files from one directory to another, and creating a zip file.

But since I probably won’t be able to test every single netbook and ultraportable laptop released over the next few years, I wanted to make my benchmarking tools available to the public. And it occurred to me that some of the files I was using in my tests were copyrighted and shouldn’t be distributed. So I’ve put together a new set of benchmarking tools which are available for download here.

The test consists of 4 parts:

The Liliputing Benchmarking tools (mirror link) are available as a 453MB ZIP file. When you uncompress it to a folder you should have 2186 files that take up about 478MB, including the XViD codec, VirtualDub, and WinLame.

Here are the results for the Asus UL30A:

Just for comparison’s reference sake, here are the results of the first batch of tests I ran on the UL30A, using the same set of files as I used when testing the Acer Aspire 1410 and HP Mini 5101:

The results should be fairly similar for the Asus UL20A, which has virtually identical hardware, but a smaller 12.1 inch display. But I’ll be curious to see how other laptops with the SU7300 processor stack up against the Asus UL30A… not to mention all those other machines with different processors.

Thanks to psydeways for the idea of making my benchmarking tools public!

19 replies on “Benchmarking the Asus UL30A (and other PCs)”