The original Asus Chromebook Flip C100 was an unexpected delight when it launched: a relatively inexpensive 10 inch convertible notebook with Google’s Chrome OS and beta support for Android apps, allowing you to use the device as either a Chromebook or a pseudo Android tablet.

Weighing just under 2 pounds, it also didn’t feel crazy heavy for a tablet. And while the Chromebook Flip C100’s Rockchip RK3288 isn’t crazy fast, it offers decent performance for most tasks.

But it’s been nearly two years since the C100 launched… and when Asus finally got around to launching another Chromebook Flip it was a pricier model with a bigger display.

Now it looks like the true successor to the Chromebook Flip C100 is on the way. But it may not be everything you were hoping for. 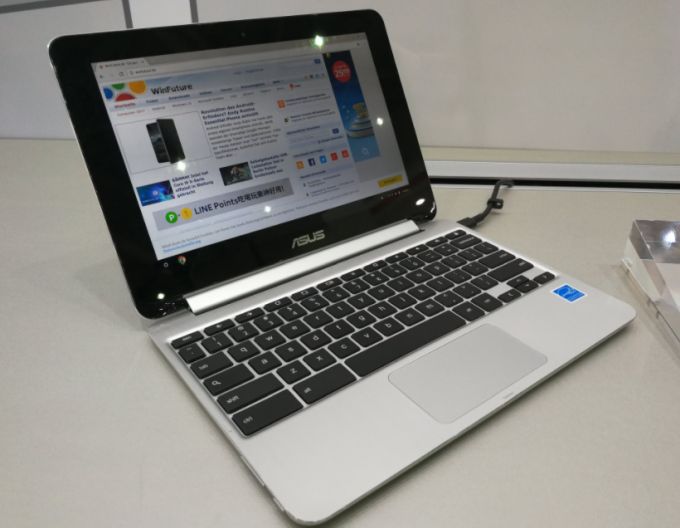 Roland Quandt spotted the new Asus Chromebook Flip C101 is on display at Computex, and it has the same basic design as the original… right down to the 10.1 inch, 1280 x 800 pixel touchscreen display.

There are at least two important upgrades though. The new model has a 6-core Rockchip RK3399 processor instead of a quad-core RK3288 chip. And the new model has two USB Type-C ports, where the original had two USB 2.0 Type-A ports.

There’s also a USB 3.0 Type A port and a microSD card slot.

It still weighs less than 2 pounds and measures about 0.6 inches thick. Quandt says the new model has an aluminum chassis.

Like other “flip” devices, the new Chromebook Flip C101 has a 360-degree hinge that lets you fold the screen all the way back and hold the notebook like a tablet.

The new model is expected to be available with 2GB and 4GB RAM options and 16GB/32GB storage options.

Expect the new model to ship soon for around the same prices as its predecessor, which probably means $300 or less.