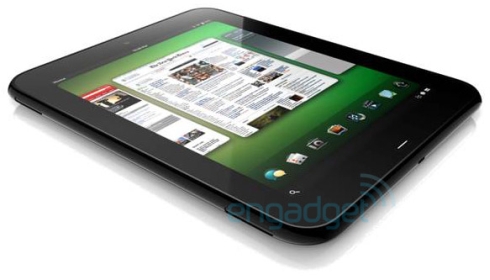 HP is set to make a major webOS-related announcement on February 9th, and smart money is on the company’s first tablet designed to run the operating system. Now Engadget has received a few rendered images of a webOS tablet, which the anonymous tipster says is one of two tablets HP plans to bring to market.

If true, it looks like we can expect a 9 inch model and a 9 inch model. The images show the 7 inch model, with a front-facing camera, a micro USB port, and no buttons to speak of on the front of the tablet.

There’s no word on specifications or battery life, but it looks like HP and Palm will be offering WiFi-only, 3G, and 4G capable models. While HP may be getting ready to announce the tablets, it doesn’t look like they’re due to hit the streets until the second half of 2011.

As with all leaks though, it’s a good idea to take everything from the pictures to the launch timeframe with a grain of salt.

Update: DigiTimes reports the first webOS slates will ship in March. Somehow that seems more likely to me than September, but until we get an official announcement all we can do is wait… and wildly speculate.