The next version of Google’s Android operating system will be the first to have built-in, official support for multi-window mode, letting you view more than one application at the same time. Some companies, including Samsung, have been offering their own multi-window solutions for Android for years, but they’ve always had to alter Google’s software to do that.

Some of the most dramatic versions of multi-window Android software include operating systems like Remix OS, Phoenix OS, and Light Biz OS, which all make Android look like a desktop operating system: not only can you view two apps in side-by-side windows, but you can resize and move windows around the screen just like you would in Windows, OS X, or other desktop-style operating systems.

But it looks like you might not need a modified version of the operating system. Android N has experimental support for “freeform window” mode, which could allow you to use stock Android software as a desktop-style OS. 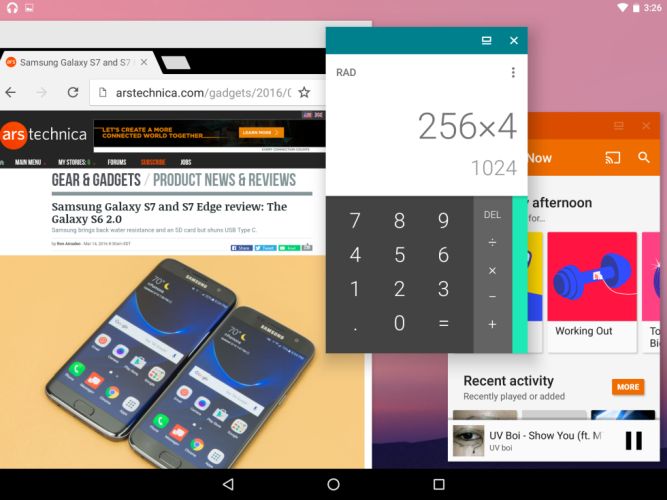 We first heard about freeform window mode earlier this month, when Ars Technica noticed bits of code and mentions of freeform support on the Android developers website.

Now Ars Technica has posted instructions for enabling freeform windows, along with a bunch of photos showing how it works.

Once this mode is enabled, you can closer or maximize apps by tapping icons in a bar at the top of each window, move them around the screen by dragging that bar, or resize apps by tapping the edge of an app window and dragging it to change the size and shape. When a window is small, you’ll see the phone-sized user interface for apps. If a window is large enough, the user interface will automatically switch to tablet mode (assuming the app has a tablet UI).

Freeform window mode works whether you’re using a phone or a tablet, and you can also connect a mouse and keyboard and use desktop-style features (like watch as a mouse cursor changes to a resize icon when you hover by the edge of an app window).

There are some things that don’t work as well as you might hope though. There’s no taskbar. Windows don’t actually float over your home screen or any sort of desktop. And memory management doesn’t work the way you might expect yet: if you’re watching a video in one window, tapping another window can cause videos to stop.

This is where third-party software like Remix OS still have the edge: it suffers from none of those problems.

But it looks like the developers of Remix/Phoenix/Light Biz and other software are going to need to work pretty hard if they want to remain one step ahead of Google… because simply having a version of Android that supports freeform windows won’t be a distinguishing feature forever.

It’s not clear at this point whether freeform mode will be available to everyone when Android N launches this summer. Right now it’s kind of hidden and takes a bit of work to activate. It seems to be included in the developer preview much the way initial support for multi-window mode was included in the Android M developer preview… which suggest that if it’s not polished enough to launch this summer, we might have to wait for Android O.