Amazon’s Echo is a voice controlled device that you can use to play music, set reminders, get answers to questions and more. It has a microphone array system designed to let Echo hear your voice requests even in a noisy environment. But Echo also comes with a remote control with media playback buttons and a built-in mic that lets you speak directly to the remote.

But it turns out that remote has another use: hook it up to a talking computer and you can basically automate Amazon Echo. Want it to report the news every 30 minutes, let you know when you’ve got a new email message, or play music at a set time? There’s a hack for that. 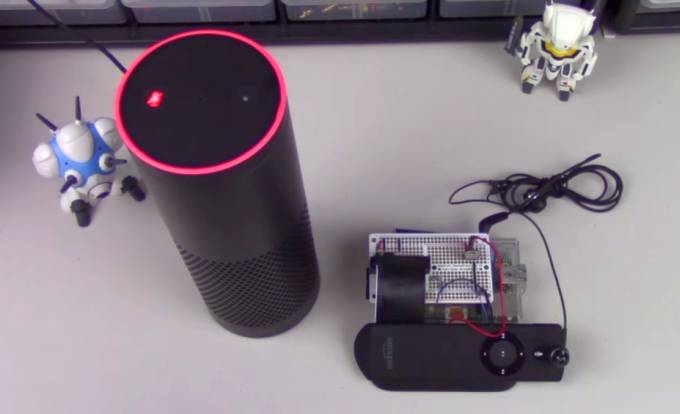 Guillermo Amaral figured out a way to configure a Raspberry Pi mini-computer to speak commands to the Amazon Echo remote. This opens the door to running commands on the Pi, allowing you to type out requests instead of speaking them aloud or scheduling future jobs.

The computer then speaks a command which is sent to a headphone… which is placed by the Echo remote control’s microphone, which is also wired to the Pi so that it knows when to expect a voice command. The remote then sends the command to the Echo, prompting it to respond to commands.

The end result is that you won’t hear anything the Raspberry Pi says, but you will hear the Echo’s response. Unfortunately, the setup can be a bit glitchy: the Echo doesn’t always understand the words spoken by the Pi perfectly.

But it’s still a pretty nifty, relatively cheap and low-tech way to automate tasks on the Amazon Echo without actually touching the software or hardware running on the Echo itself.

You can find more details at Amaral’s Hackaday project page.