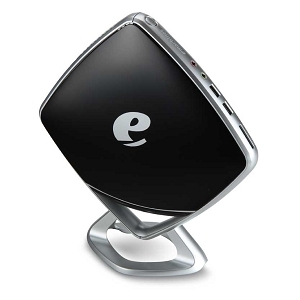 At first glance, the eMachines ER1401 looks like a version of the Acer Aspire Revo nettop with rounder edges. But look under the hood, and you’ll find that the ER1401 has a rather unique set of components.

Acer owns the eMachines brand, and while most of Acer’s nettops have Intel Atom processors and either integrated Intel graphics or an NVIDIA ION graphics card, the eMachines ER1401 takes a different approach. It has a AMD Athlon II Neo processor and NVIDIA GeForce 9200 graphics.

It’s not just the components that are unusual, but also their combination. AMD systems typically ship with ATI graphics, which makes sense since AMD owns the ATI brand.

The nettop will also reportedly support up to 4GB of DDR3 memory, a 2.5 inch 500GB hard drive, Gigabit Ethernet, 4 USB 2.0 ports, an HDMI port, D-Sub connector, S/PDIF, and two audio jacks. It has a flash card reader, and an optional WiFi card.

The nettop is showing up on the eMachines New Zealand web site. It’s not clear if or when the mini-desktop will be available in other countries.