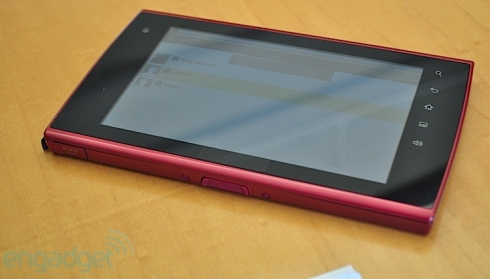 You know that eLocity A7 tablet from Stream TV Networks that we spotted a earlier this month? Apparently it’s real… and it’s coming to Amazon net month, where you’ll be able to order the tablet for $399.

So what do you get for nearly $400? How about a 7 inch tablet with Android 2.2 and an NVIDIA Tegra 2 chipset for high quality graphics and HD video playback. It has an 800 x 480 pixel capacitive multitouch display, an accelerometer, and USB and HDMI ports. You can even hook it up to an external TV to display 1080p HD video.

Engadget’s Joanna Stern got a chance to check one out in person, and she came away mighty impressed. She says the $399 price tag will include a wireless keyboard and HDMI cable.

The only catch? At launch the tablet will ship with Android 2.1. Froyo won’t be available until October. Oh yeah, the only other catch? The tablet ships without Google’s Android Market, and instead comes with the third party GetJar app store.

You can find more photos, as well as a video at Engadget.