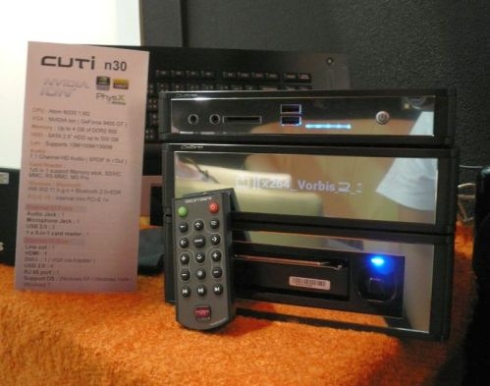 Computer Maker Sparkle is living up to its name with its latest home theater PC, a shiny little number based on the NVIDIA ION platform which bundles a dual core Intel Atom 330 CPU with an NVIDIA GeForce 9400M CPU.

The Sparkle Cuti n30 is a modular system that comes in several parts. You can pick up just the core system with the processor and basic components. There’s also a unit that adds I/O ports like audio jacks, a memory card reader, and a few USB ports, and another module that adds a hot-swap bay for 2.5 inch hard drives.

Fudzilla, which spotted the system at Computex last week, isn’t clear on whether all three modules will be sold together or separately, or how much the system will cost.