Samsung is adding a new model to its Galaxy Tab S line of premium tablets… but this time the company is launching a Windows tablet rather than an Android model.

The Samsung Galaxy TabPro S is a 12 inch Windows 2-in-1 tablet with a thin and light design and a detachable keyboard dock. It has a fanless design, an Intel Core M Skylake processor, and up to 10.5 hours of battery life. The tablet also supports an optional Bluetooth pen and a multi-port adapter that connects to the tablet’s USB Type-C port.

Samsung says the Galaxy TabPro S should be available in February. 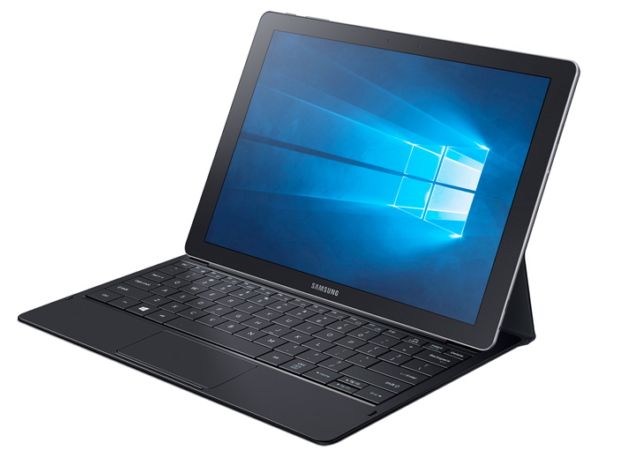 It’d be tempting to call this tablet Samsung’s answer to the Microsoft Surface… and I guess it kind of is. But Samsung’s model has a few distinctive features including a 2160 x 1440 pixel AMOLED display and a compact design: it measures just a quarter of an inch thick and weighs about 1.5 pounds.

The keyboard cover features a full-sized keyboard, an adjustable hinge that lets you alter the screen angle, and a Pogo pin connector that allows the keyboard to charge while it’s connected to the tablet.

Samsung’s Windows tablet has 4GB of RAM and will be available with 128GB or 256GB of storage. It supports 802.11ac WiFi, Bluetooth 4.1, and NFC and has 5MP front and rear cameras.

Samsung says you should be able to fully charge the tablet’s 5,200 mAh battery in about 2.5 hours.