The Samsung Galaxy S5 is a smartphone with a 5.1 inch full HD display, a speedy processor, and a dust and water resistant case. But if that’s not good enough for you, Samsung also has a model with a more rugged case.

It’s called the Samsung Galaxy S5 Active, and it’s now available from AT&T for $200 with a 2-year contract.

The phone has a rugged case that comes in Camo Green, Titanium Gray, or Ruby Red. 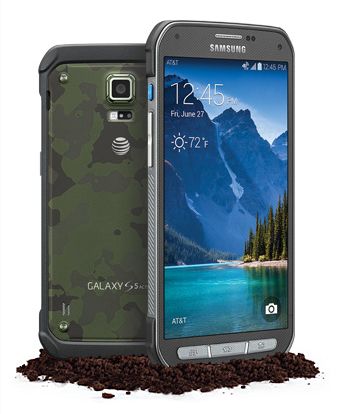 But the Samsung Galaxy S5 Active has a slightly chunkier design thanks to its rugged case that’s shock and water resistant and dustproof. It also has physical buttons below the screen and lacks a fingerprint sensor.

Samsung says it can be submerged in up to 3 feet of water for up to 30 minutes without suffering any damage, as long as the port covers are closed tightly. The phone also meets MIL-STD 810G standards for shock, temperature, humidity, rain, and altitude performance.

Samsung’s also offering $50 off the price of a Gear Fit activity tracker if you pick one up at the same time as the Galaxy S5 Active. And if you don’t feel like signing up for a contract you can buy the phone outright for $715.