The ReMarkable tablet is unlike just about anything else on the market today. It’s not really designed to compete with a Kindle or an iPad Pro, although it has some features that you’d expect from each. Instead, the ReMarkable is basically a digital reading, writing, and sketching device.

It has a 10.3 inch E Ink display to offer a paper-like reading experience, and a felt-tipped pressure-sensitive digital pen that offers a pen-on-paper like writing experience. 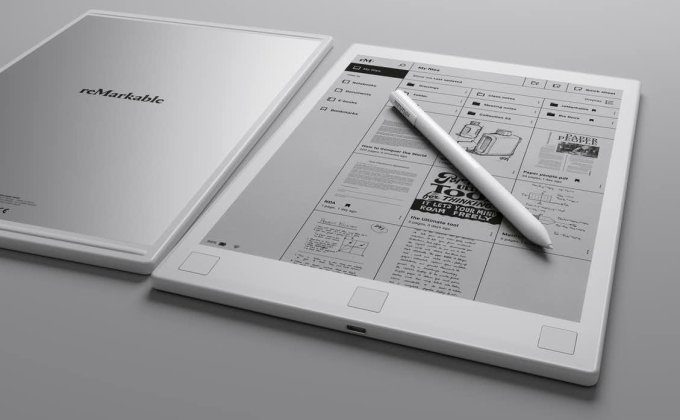 Most reviewers say that writing on the ReMarkable really does offer a nearly paper-like experience. The pen doesn’t require a battery and palm rejection is good, so you can rest your hand on the screen while you scribble away.

There are a few down sides. Text and images don’t look as sharp as on a Kindle Paperwhite or better. Amazon’s latest eReaders have smaller screens with higher pixel density.

Performance isn’t super speedy and battery life isn’t great (by eReader standards, anyway). ReMarkable says to expect up to 5 days of battery life on a charge, but reviewers say they’ve been getting closer to 2-3 days. And while the device isn’t really any slower than a typical eReader, it can feel sluggish when compared to an iPad or Android tablet when interacting with menus thanks to the relatively pokey 1 GHz ARM Cortex-A9 processor, anemic 512MB of RAM, and lag associated with the E Ink display’s need to refresh when you’re doing most things other than writing or drawing.

The device also uses a custom Linux-based operating system, so there’s a learning curve associated with using the tablet. It may take a little while to get used to the tools for creating, editing, viewing, and synchronizing documents.

If you’ve been waiting years for a digital notepad with a paper-like display and pen-like input, it sounds like the ReMarkable may be the best device money can buy right now. Unfortunately it’s still an imperfect device and it takes a rather considerable amount of money to buy the writing slate.

I suspect the market for this sort of gadget is much smaller than for multi-purpose products like the Microsoft Surface Pro, iPad Pro, or Samsung Galaxy lines of pen-enabled tablets though. So while it’s possible the price could eventually come down over time, I would never really expect a gadget like the ReMarkable to be as cheap as a Kindle or Amazon Fire tablet. The economies of scale probably just aren’t there.

For some more detailed hands-on impressions. here are some of the first detailed reviews of the ReMarkable tablet: