Pear Linux is an operating system designed to bring a bit of the look and feel of Apple OS X to GNU Linux. The French developers behind the operating system released Pear Linux Comice OS 4 recently, and it comes in 4 versions: 32-bit, 64-bit desktop editions, and 32-bit KDE and Netbook versions.

I took the netbook edition for a quick spin, and it’s an interesting little operating system. 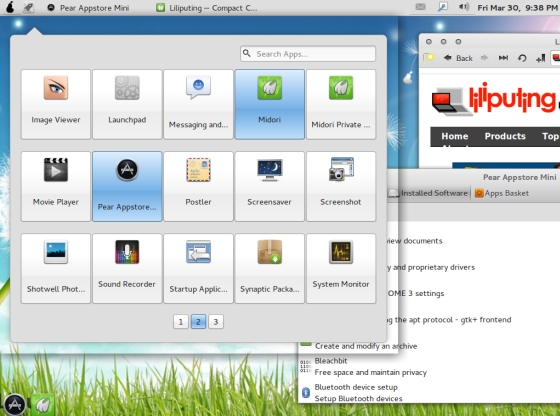 Pear Linux is based on Ubuntu Linux, so it should be able to run most apps that are available for Ubuntu.

But the key difference is a user interface that’s been given a number of Apple-like tweaks. The desktop and netbook editions of the OS are based on the GNOME desktop environment, but the menus, graphics, and system panels all have OS X-inspired graphics.

The developers call the modified user interface the Comice Shell.

The netbook edition also features a simplified Launchpad which you can open by clicking a button in the toolbar at the top of the screen. It brings up a menu that provides large icons to take you to your apps and settings.

In addition to featuring an app launcher that’s better suited to notebooks with low resolution displays, the disc image for the operating system is a few hundred megabytes smaller than the full version of Pear Linux, coming in at 868MB.

The version of Pear based on the KDE desktop environment is a new addition to the Pear family and it’s based on KDE 4.8.1 software.