Motorola’s new Moto Z smartphones are have high-res displays, speedy processors, and other features to help them compete with other 2016-era flagship phones. But what really makes them stand out is their support for MotoMods, which are optional accessories you can slap on the back of the phone to add functionality.

When the phones start shipping this summer, Motorola expects to have four MotoMods available: a projector, speaker, battery, and “style shell” which lets you change the color or texture of the phone’s back.

But Motorola is also showing off a number of experimental MotoMods we could see in the future, opening up a developer program for companies that want to create their own, and maybe even working on a few of its own that haven’t been announced yet. 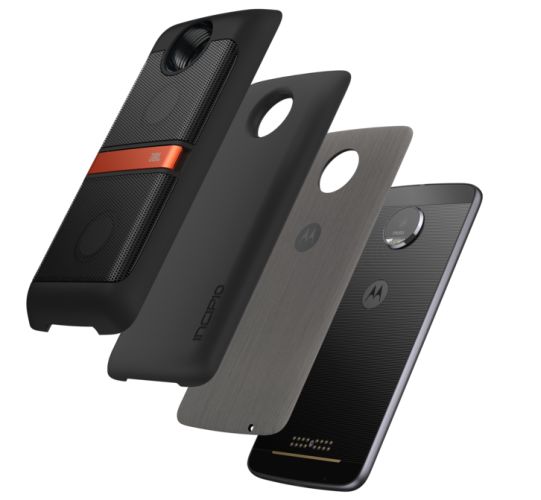 Let’s start with the rumors/leaks: leading up to the official Moto Z launch, we’d heard that Motorola was working on a camera MotoMod, but it was nowhere to be seen at the Lenovo Tech World press event where the company officially unveiled the phones and their first modules. 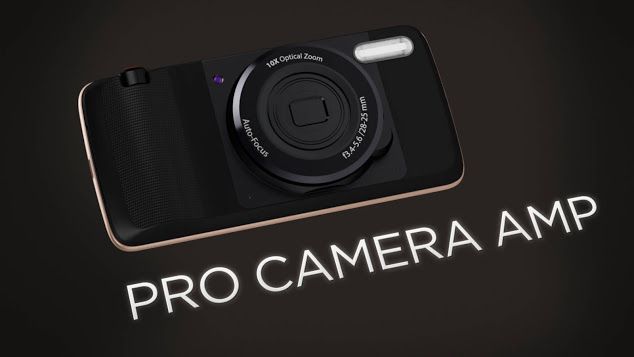 Now hellomotoHK has shared another picture of the “Pro Camera Mod,” which seems to feature a camera with a 10x optical zoom lens, auto-focus support, a dedicated shutter button, and a flash bulb.

There are also pictures of an “Adventure Mod,” which is said to make the phone waterproof.

Motorola also mentioned during this week’s events that it’s working on another battery Mod with Mophie, a company that has a long history of making smartphone cases with extended batteries hidden within. A MotoMod version could potentially be a lot thinner and better looking.

Another experimental Mod is a weird one with an LCD screen that shows whatever’s on the front of the screen, for some reason. As a mirror of the primary display it might not be all that useful, but if it could also work as a secondary display for viewing notifications when the primary screen is off, that could be something. It also shows that second screen Mods are possible, opening the door for E Ink or other technologies to take a place on the back of your phone.

The OneCompute Mod, meanwhile, is a Mod that lets you use a Moto Z phone like a desktop computer. Snap the Mod onto the back of the phone, then place it on a dock and your phone now has three USB 3.0 ports, an HDMI port, and an external charging port.

In other words, OneCompute lets you hook up an external display, keyboard, mouse, and other accessories to run Android apps on a big screen display (the user interface can adapt to the extra screen real estate by essentially showing three side-by-side home screens without requiring you to scroll back and forth between them).

There’s no word on whether the OneCompute or LCD screen MotoMods will ever make the jump from experimental concepts to real-world things you can spend money on. But they do show some of the potential of Motorola’s modular system.

It’s possible we could see new Mods in the future that extend the phones’ capabilities in different ways. The modules attach to the back of the phone thanks to strong magnets and a 16-pin connector. As soon as a Mod is connected, it starts working: there’s no need to reboot you device or open an app.

For example, Motorola showed a demo of a Moto Z phone playing music through its built-in speakers. Then a JBL Soundboost speaker was snapped onto the back of the phone, and a second later the music started blasting out of the larger, louder speaker.

According to the company’s developer page, Mods can tap into the phone’s features including the display, camera, battery, audio, USB, sensors, or input… so we could see Mods with features like E Ink screens, infrared cameras, game controllers, blood pressure monitors, printers, or metal detectors. 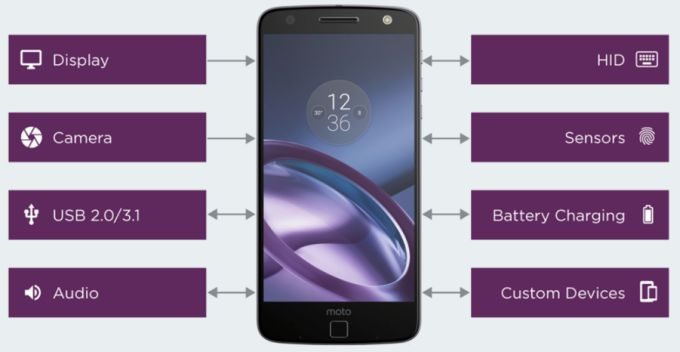 Some of those Mods could have wide appeal, while others might be niche devices for professionals or hobbyists with specific needs. For example a Mod might transform a Moto Z into an inventory scanner for retail or warehouse workers. Or one might ruggedize the phone and give it a sunlight readable display for use by field workers.

Motorola says Mods designed for these first-gen phones should be compatible with next-gen Moto Z smartphones as well… which means that some Mods might have a longer shelf life than the phone you buy them for.