AliExpress seller Kimdecent is offering a USB thumb-drive sized mini computer for $78. It looks a lot like the popular MK802, but while the MK802 has an ARM Cortex-A8 processor, the Kimdecent Androstick is based on a chip with a newer ARM Cortex-A9 design.

If the Androstick looks familiar, that might be thanks to its similarity with the Infinitec Pocket TV — a device that’s garnered a bit of attention due to a popular Kickstarter campaign. It’s likely that both devices are based on the same design, although it’s possible that they could ship with different software. 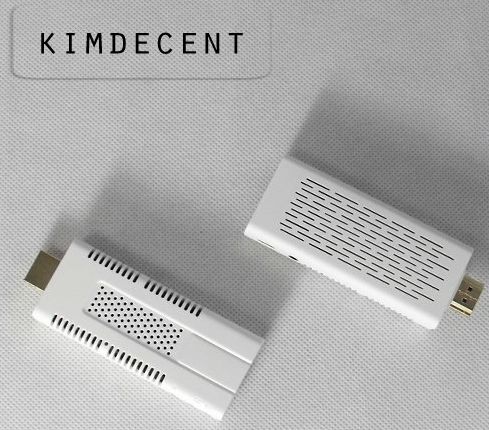 The Kimdecent Androstick has 512MB of RAM, 4GB of storage, Mali 400 graphics with support for 1080p HD video playback, and an HDMI connector at one end that lets you plug the computer directly into a monitor or HDTV without any adapters.

It also has supports 802.11b/g/n WiFi and has a USB port, a microSD card slot, and a mini USB port. KimDecent also includes a USB cable, power adapter, IR cable, and a small infrared remote control.

While the Androstick ships with Google Android 4.0, I don’t see why it wouldn’t also be able to run Ubuntu or other Linux-based operating systems that support ARM-based chips. But there are a few things you should probably know before plunking down $78 for this little computer.

The good news is that a number of people have already left positive feedback for the seller, indicating that the Androstick is a real product and the seller does actually ship it — something I know some people worry about when ordering from AliExpress.

The less good news is that one of those early customers has posted some initial impressions on his website — and they’re not all good:

It’s not all bad news though. Apparently YouTube video looks good, some Flash video sites are also handled well. Audio sounds pretty good. And the Androstick was able to handle a variety of USB storage devices as well as a USB mouse and keyboard.