Last year’s Remix Mini was a small, inexpensive box that you could use as a computer thanks to Jide’s Android-based Remix OS software. But this year the company is launching a device that it’s positioning as 3 products in one: a PC, a game console, and a TV box.

The Remix IO is expected to ship in March, but you can reserve one by making a pledge of $99 or more to Jide’s new Kickstarter campaign. 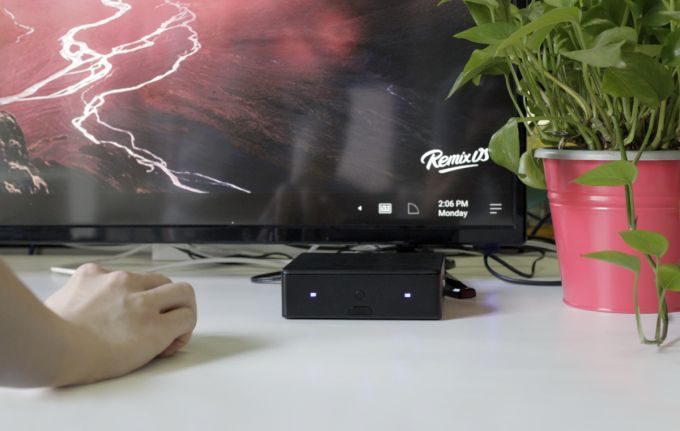 The small box looks a bit like a cross between a Roku and an Intel NUC. It’s tiny, but features a bunch of ports, including HDMI 2.0, VGA, Ethernet, four USB 2.0 ports, and a 3.5mm audio jack as well as a microSD card slot for up to 128GB of removable storage.

Under the hood, the system is powered by a 1.5 GHz Rockchip RK3368 octa-core ARM Cortex-A53 processor with PowerVR SGX6110 graphics. Jide says the system should be able to handle 4K video at 60 frames per second.

The system features 2GB of RAM and 16GB of storage.

But it’s the software that sets Jide’s products apart. The Remix IO will ship with a new version of Remix OS that’s based on Android 7.0 Nougat. Like earlier versions of Remix OS, there’s support for a desktop-style environment with a taskbar and the ability to run apps in floating, resizeable windows.

There’s also a new TV Mode user interface. You can navigate through apps using the remote control that comes bundled with all Rremix IO models, or with a mouse and keyboard. Opt for a Gaming Edition of the Remix IO and you’ll also get a game controller that can be used with TV Mode.

TV Mode is also coming to last year’s Remix Mini, but due to hardware issues, the older box will not be upgraded to Android 7.0.

Jide says the Remix IO can also run apps developed for Google’s Android TV platform, allowing you to run standard Android apps and Android TV apps on the same device. Note that you won’t be able to get them from the Google Play Store though.

Jide also provides a “gaming toolkit” that lets users play games that were developed for touchscreens on non-touch devices by mapping certain functions to keyboard, mouse, or game controller buttons.