Acer may be the only company that actually has a laptop called the Cloudbook. But Intel is using the term to describe a whole category of low-cost, low-power Windows laptops that sell for between $169 and $269. And Intel says since the category was introduced in 2014, over 5 million units have been shipped.

Basically, cloudbooks are Chromebook-like notebooks with entry-level specs and price tags, but with Windows software instead of Google Chrome. Another way to think of them might be as the evolution of the netbook… but while netbooks typically had screen sizes ranging from 7 to 10 inches, most cloudbooks have screens between 11.6 and 14 inches.

At the Intel Developer Forum in China this week, Intel is encouraging device makers to use its upcoming “Apollo Lake” chips for next-gen cloudbooks (and convertibles, and entry-level desktops). 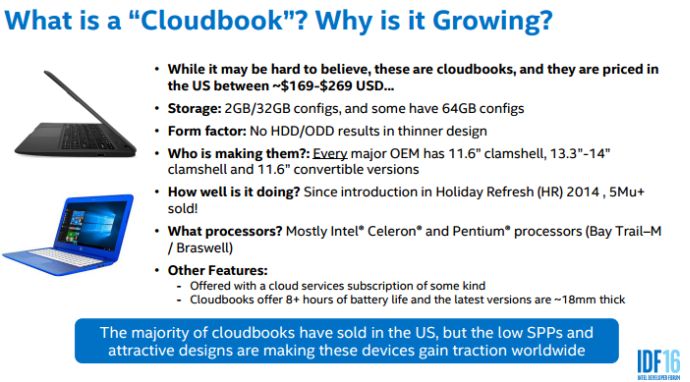 Up until now, most of the laptops that Intel considers cloudbooks have featured Intel Atom, Celeron, or Pentium chips based on the Bay Trail or Braswell architectures. They typically have 2GB of RAM, 32GB to 64GB of flash storage, and compact designs.

In the second half of 2016, Intel will offers its Celeron and Pentium chips based on its Apollo Lake platform, offering improvements to CPU and graphics performance as well as longer battery life. But these are still entry-level, low-cost chips.

The company says laptops, desktops, and convertibles using Apollo Lake chips can be slimmer than models using earlier processors since, among other things, a smaller battery will offer the same amount of battery life. The company says there  are also cost reductions involved in adopting the new platform, which could improve profit margins for computer makers (or retail prices for computer users).