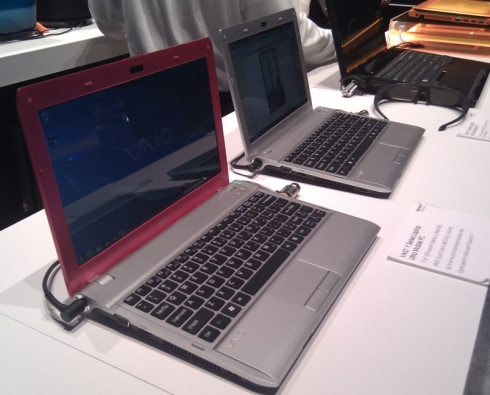 Sony is reportedly looking to get out of the netbook game, instead focusing on higher performance, higher profit margin notebooks. But that doesn’t mean the company will only be focusing on laptops with almost laughably high price tags. Last week Sony unveiled the YB-series laptop with an AMD Fusion chip and a starting price for about $550.

The laptop has a chiclet-style keyboard and two nice big buttons below the touchpad. It will come in several different color combinations, including three-tone models with colorful lids, silver/gray bodies, and black bottoms. It looks like there will also be a solid black or silver and black option for those with more conservative tastes.

The Sony YB-Series should be available next month.

You can find a few more photos after the break. I snagged a few additional photos when I visited the AMD booth at a pre-CES event earlier in the week (before the Sony YB-Series had been officially announced).