The GMK NucBox is a desktop computer that’s smaller than most, measuring just 2.4″ x 2.4″ x 1.7″. That makes it easy to hide behind a TV or monitor or under a desk, whether you plan to use it as a media player, file server, digital signage device, or anything else.

GMK sent me a couple of demo units which I reviewed last year, and while they’re not the most powerful computers around, they are certainly among the smallest (along with similar devices from Chuwi and others). Capable of running a range of basic computing tasks, the NucBox typically sells for around $230 and up. But if you’d like a chance to win a slightly used GMK NucBox, read on to find out how to enter Liliputing’s giveaway! 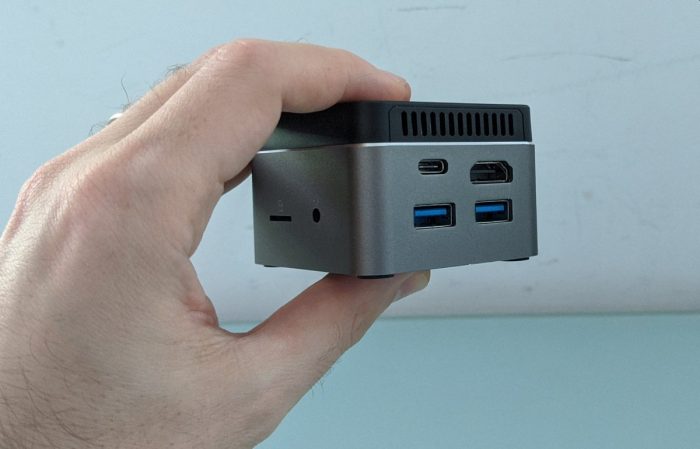 The NucBox units I’m giving away feature Intel Celeron J4125 quad-core processor, 8GB of RAM, and 128GB of storage. They feature two USB-A ports, an HDMI port, and a USB-C port (that can only be used for power and not data).

They’re both lightly used, and the only significant difference between the two little computers is that I couldn’t get Ubuntu or other GNU/Linux distros to boot on the first pre-production prototype GMK sent me, so the company sent me a retail version of the NucBox which does support installation of Ubuntu other operating systems from a USB flash drive.

So here’s how we’re going to do this contest. I’m giving away both NucBoxes. But rather than hold two different contests, I’m going to do it all at once.

At the conclusion of the contest, I’ll pick a name out of a hat (or rather, a random number generator) and send a message to the winner asking them if they’d rather have the Windows-only NucBox or the Windows + Linux compatible version. After they’ve responded, I’ll pick another name and the second winner will get whichever mini PC is left.

Update: This contest has ended.

That’s pretty much it, but here’s a bit of fine print about who is and is not eligible to win: