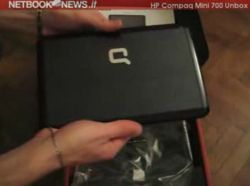 The Compaq Mini 700 is pretty much the same machine as the HP Mini 1000 netbook. But it’s got a big Compaq logo on the cover instead.

HP announced the two netbooks on the same day in October. But the HP Mini 1000 launch grabbed all the headlines in the US, while only a handful of European blogs and news sites took notice of the Compaq Mini, which leads me to believe that we won’t see this particular model in the US anytime soon.

Italian web site, Netbook News, on the other hand has already managed to get their hands on a Compaq Mini 700 and they’ve posted an unboxing video. Aside from the lid, the netbook looks exactly like the HP Mini 1000. It has the same keyboard, screen, touchpad, and speaker. But don’t take my word for it. You can see it for yourself after the break.